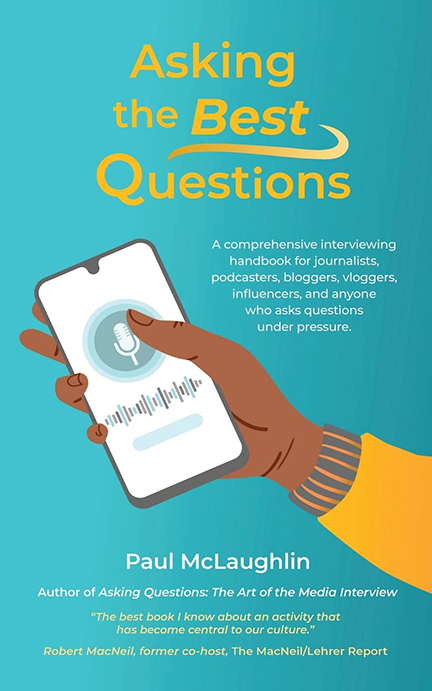 Beach author and freelance journalist Paul McLaughlin has recently released his newest book, Asking the Best Questions. A modernized sequel to his 1986 title, and first ever book, Asking Questions: The Art of the Media Interview.

In his book, McLaughlin teaches readers how to make the most of every interview, using case studies of seasoned journalists.

Born in 1950, McLaughlin first set sail to Canada with his parents from Scotland at the age of seven. He would attend school in Ottawa where he’d obtain an English degree. Despite never being trained in contemporary journalism, McLaughlin was given the opportunity to pursue a career in that field.

“I think I was one of the last people in journalism who got hired off of the streets,” said McLaughlin. “I had never gone to journalism school but a friend of mine told me about a position available at CBC Radio in Ottawa on their morning show.”

McLaughlin went onto be hired as a researcher for CBC Radio in 1973. Initially just lining up interviews, McLaughlin would become a producer in one year and then, later, a freelance broadcaster.

That very same year, he’d blunder one of his first assignments.

“I was once told to line up René Lévesque, who was a former TV journalist and the head of the Parti Québécois in Quebec at the time,” said McLaughlin. “And he did not tolerate fools.”

Lévesque was an outspoken and prolific leader who most notably, with the passing of Bill 101, was able to make French an official language in Quebec in 1977.

“I just picked up the phone, called the number I’ve been given for his party office, and he answered the phone,” said McLaughlin. “I babbled like an idiot and within a minute or two he said, ‘Call me back when you know what you’re saying’ and slammed the phone.”

Despite the dismissal, McLaughlin found this to be the best type of lesson.

“That which doesn’t get me fired, makes me stronger,” said McLaughlin.

It’s lesson he tells many times over his book, sharing the success and failures of his journalist peers.

McLaughlin would eventually teach journalism part-time, first at Algonquin College in 1978, and then at Carleton University.

McLaughlin moved to Toronto in 1983, where he taught journalism for 20 years at Ryerson University (now Toronto Metropolitan University) and York University where he still works to this day. It was not until 1997 that McLaughlin found his home in the Beach.

“I fell in love with the Beaches and the Boardwalk,” said McLaughlin. “Yesterday I did a beautiful long walk with my partner and she and I had a glorious time.”

In addition to being a journalist, McLaughlin is a playwright. He has written five plays that went on to be produced professionally.

“I’ve had a few moments that I’ll never forget, watching something that I’ve written come to life on stage,” said McLaughlin. “That has given me a tremendous kind of nourishment.”

Being an author for nearly 40 years, McLaughlin said writing will be a lifelong passion of his.

“I have no plans to retire,” he said. “I will continue to write, I think, for the rest of my life.”

You can buy Paul McLaughlin’s Asking the Best Questions on Amazon.