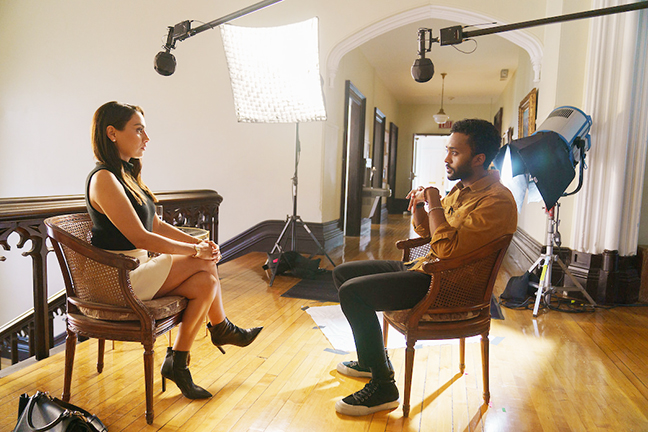 Mila Kunis and Dalmar Abuzeid (who grew up in the Beach) in Luckiest Girl Alive which was filmed in Toronto and area is now showing on Netflix. Photo: Sabrina Lantos - Netflix.

“The past is never dead. It’s not even past.”
— William Faulkner quote in the film.

Recent news headlines can make us feel like we’re trapped in an episode of The Handmaid’s Tale: repression in Iran, Hockey Canada scandals, domestic violence and sexual assault trials.

One of the directors of Handmaid’s, Mike Barker, is at the helm of a new made-in-Toronto drama dealing with the difficult subject of abuse.

Ani (Mila Kunis) is a successful magazine writer who seemingly has everything in the Luckiest Girl Alive (streaming this month on Netflix). Her picture-perfect life begins to unravel when a true crime filmmaker Aaron (Dalmar Abuzeid) asks her to relive her traumatic past and she’s forced to confront the dark secrets she’s tried so hard to escape:
“I’m working on a documentary about the incident at your high school. There are still so many questions that you’ve never answered. People want to know. Were you a hero or…accomplice? Don’t you want to tell your side of the story?”

Should Ani speak the truth about her traumatic experiences or remain silent? Are there excuses we tell ourselves? What is “the truth”? Will it bring Ani justice or ruin her life?

Luckiest Girl Alive is based on the best-selling 2015 debut novel of Jessica Knoll with elements inspired by her real life. The author has revealed that she herself was assaulted as a teenager and feels she had to write the screenplay herself: “I can’t imagine anyone else touching this.”

The story is set in New York and Nantucket, but filmed in Toronto, Cobourg and Whitby’s Trafalgar Castle School which stands in for a prestigious private academy. (The Elizabethan-style castle from 1859 was the largest private dwelling in Canada before Casa Loma was built.)

Toronto is only mentioned when Ani’s boss Lola (Jennifer Beals) tells Aaron, “I saw your short at the Toronto Film Festival a few years back.”

Dalmar Abuzeid plays the filmmaker who upends Ani’s life. He recently tweeted, “I’m truly proud to be in this film… a gift of an experience to work on.”

Abuzeid was born and raised in the Beach and played bass in the band SoundSpeed. You may recognize him from Degrassi: the Next Generation or his Canadian Screen Award-winning performance in Anne with an E.

Luckiest Girl Alive shows disturbing events which may trigger some viewers. Knoll has said that writing the novel helped her confront the trauma. Kunis hopes the film “helps people find their true voice if they feel they have lost it.”

Maybe by seeing through another’s eyes we can learn to have more compassion for their pain.