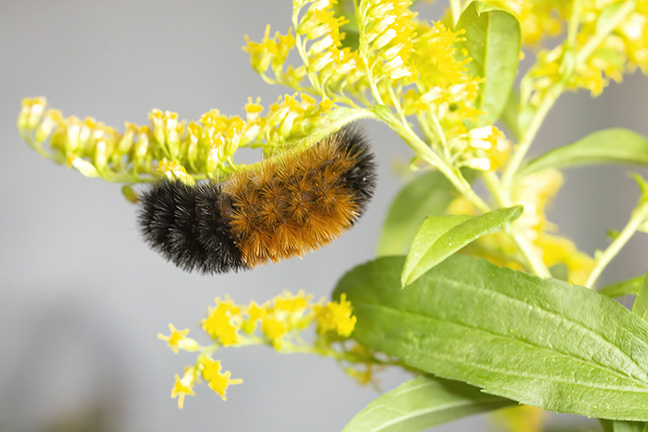 Photo above, a wooly bear caterpillar. Inset photo, a juvenile bald eagle spotted in the Beach. Photos by Ann Brokelman.

Fall has arrived. Some people love the break from the heat, some like the changing colours in the trees, and many others have been waiting all year for their pumpkin-spice drinks.

As for me, I’ve had a few autumn trips to Northern Ontario planned for ages, that I’m finally going to make happen. I’m expecting to see a lot of eagles, and I’ve got my fingers crossed for moose, bear, and lynx sightings. I assume I’m going to get lost on a few back roads, but I think I’ll enjoy the adventure of finding my way back.

Finally, I’ve had a scenery picture I’ve been hoping to capture for years: fog over a lake with the background trees during their full colour change. I couldn’t tell you why I want that particular picture, but I feel like it’s been missing from my collection.

Before I take off north, however, there are a few local things I can intend to advantage of. On a good northwestern windy day, I should be able to see dozens, or even hundreds, of hawks, osprey, turkey vultures, and eagles flying along Lake Ontario on their way south.

Dozens of songbirds and the remaining monarch butterflies are also making their way along the water’s edge. I’ve been watching them every year for well over a decade, and I still think I see something noteworthy every time I go out.

If you’ve never gone down to watch for them, maybe this is the year to try something new? Anywhere along Lake Ontario, but the Scarborough Bluffs in particular, should give you the best chance for some neat sightings.

The last few weeks have also brought me two random, but interesting, wildlife encounters. The other day I came across a baby milk snake on my own front walk. I had my hands full of groceries, so I couldn’t get a picture in time, but I know my mouth dropped as it slithered across the driveway and then into a crack by my front stairs.

I quickly unloaded all the food, grabbed one of my trail cams, set it up, and then grabbed my iPad to watch, off and on for three hours, to see if he would come out again. Yes, I really did watch the trail camera live, lol! My husband looked at me like I was crazy, and he might be right, but then again, he regularly spends over three hours watching the Blue Jays play. Unfortunately, the snake didn’t come out.

The other cool sighting was of a woolly bear caterpillar, (Pyrrharctia isabella). These amazing black and rust-coloured caterpillars eventually turn into the orangey-yellow Isabella Tiger Moth.

My husband Erle found this guy on the ground in our back patio. I safely put him into a container, so I could take a few photos, before moving him onto a tree branch where I assumed he was less likely to get stepped on.

After letting him go, I went back inside and did a little reading up on them. Apparently they have 14 feet, and many people believe they can predict the weather. Supposedly, the more black on their body, the more severe the next winter will be. I didn’t have any other woolly bears to compare this guy to, so I’ll assume it’ll be winter as usual for us in the GTA: cold and otherwise unpredictable. Woolly bears should be fattening up right now and getting ready to hibernate through the winter. When they wake up in the spring, they’ll spend just a few days eating before spinning their cocoons. Maybe I’ll see him again next year, in moth form.

Have a great fall, everyone. Hopefully soon I’ll have some good stories to share from my trips up north.