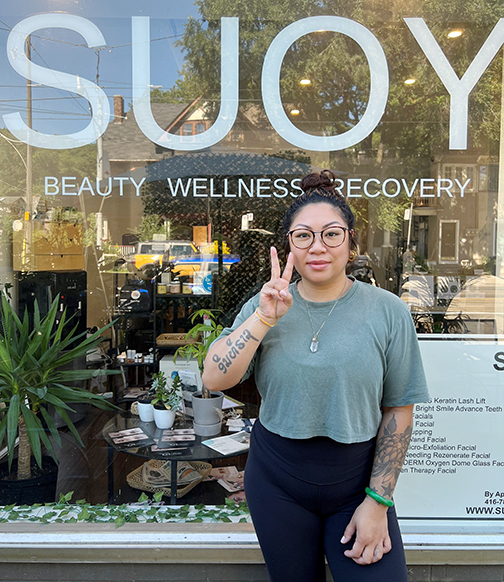 During the pandemic the thing many of us missed most was travel. Ordinarily, people will go great distances for work, adventure, and reuniting with loved ones, but unfortunately for countless others the reason is: survival.

We have watched this horrible truth unfold over the past several months as millions of Ukrainians have had to flee their nation. This was the reality Kita Inthirath’s parents faced back in Laos in the 1970s during the Laotian Civil War.

Kita is the owner of Suoy Suoy, a beauty, wellness and recovery studio at 2487 Queen St. E., just east of Neville Park Boulevard.

Kita was born in Chonburi, Thailand in a refugee camp to Laotian and Vietnamese parents. Her parents fled Laos separately and eventually met in church at a refugee camp in Thailand.

Though some people lived in the camp for many years, her father felt after a period that it was time to leave.

“My uncle had moved to San Diego and my dad saw his success as reason to move to a land with more opportunity, but when he started applying for a visa, he quickly learned they were favouring people with families. Around this same time my mom was hoping to get to North America because she wanted to go to school and get a better education. My grandfather told my mom if she wanted to go, she had to find a husband to take her. Somehow my dad found out and they agreed to go together as ‘husband’ and ‘wife’. But when she told my grandmother, my grandmother insisted that they had to get properly married. So, they had a celebration and made it official. Eventually they got pregnant with me,” Kita elaborated on her parents’ union.

Her dad treated her mother well during her pregnancy and their relationship grew along with their family. When Kita was three months old, they were finally sponsored to come to Canada by her aunt’s church group in Winnipeg, Manitoba.

“It was a rough 16-hour flight. When we arrived, it was April, and it was super cold. People from the church brought us boots and warm coats. That was the start of our life in Manitoba,” Kita said as she described her family’s migration to Canada.

Around this time Kita’s younger brother was born (her youngest brother would be born when Kita was 11 years old) and their lives became more settled. Her parents were able to save enough money to buy a small one-bedroom house.

“We lived in this house until I was 16. As we got older my parents let us rotate who got the bedroom so we could have some privacy. We never really thought much of it,” she said.

What also became part of Kita’s norm was being one of only a few Asian kids in her school; the only non whites were the refugee kids of the Laotian Catholic Community.

“They put us all in the same French immersion school. A lot of us were placed into ESL (English as a Second Language) classes because they assumed we didn’t know English. I was fully capable of speaking English. I didn’t know why I was periodically separated from everyone,” she told me.

This is an underlying problem with a good-intentioned system. No one thought to check if Kita was proficient in English, and it somehow didn’t matter that she was at the same school throughout her elementary years. Every year she was pulled out of her regular classroom for “extra help.”

There is a stigma that goes along with being singled out, and the assumption (read: racism) in this case was clear; in a very white school you don’t look like us so you must not be able to speak English.

Luckily for Kita, she is tough and was unfazed by this injustice.

“At my French Metis school, I was the only Asian person in my class. We learned about the Indigenous experience and that Chinese people built the railroads. So, whenever the opportunity came up that I could choose my own subject for a project, I chose to do it on my culture. Every chance I got I made it about who I was.”

When I asked Kita what inspired her to stand out and highlight her culture in this way she said, “In Grade 7 I was the only Asian. There was nothing about me represented in our classroom. I really felt unheard and being Lao was all I knew.”

Even though she grew up in Winnipeg, Kita was very much immersed in her Laotian culture. “We made Laotian and Thai food at home, and we didn’t have cable, so we weren’t really exposed to fashion or popular culture,” she said.

Kita and her brother didn’t feel so different from their peers until it came to food.

“Food wise we knew we were unlike the other kids who brought sandwiches to school. We had these snacks called Mama Noodles from Thailand that were a staple in our house. The other kids were curious about them as much as we were about their snacks, so we would swap,” she said with a smile.

The noodles became so popular that, ever the entrepreneur, Kita and her brother started selling them for a dollar!

Despite her strong marks and many team sports, Kita’s curiosity and need to venture outside her small community drove her to quit high school. She had a good life, but she yearned for more.

“When I got to high school, I met more people and started exploring other parts of the city. I started to question is this all there is for me? So, I ran away to Toronto on a Greyhound bus at 14 years old. I had made friends online with people who made music. I wanted to write music and sing so I thought Toronto would be a bigger city to try it.”

After close to a month Kita was forced to go back home, but that experience of trying somewhere new stayed with her.

For years afterward Kita would bounce around between going back to school and working in Winnipeg, Witchita, and Toronto.

For her 19th birthday Kita flew to California to be with her best friend Sam. What was supposed to be a short trip turned into a few months. During those months Kita and Sam decided to escalate their relationship and became pregnant. What followed next was a series of cross-border highs and lows. Ultimately, after the birth of their son, Kita decided to remain in Winnipeg without Sam.

As a newly single mother Kita worked hard at many different jobs until she found her calling.

“In 2017, I started doing lashes. I saw how profitable it could be so, I flew to L.A. to take the Yumi course. When I got back, I rented a space in a studio and became the first person in Winnipeg to do Yumi lashes. After a year, I wanted to expand and that’s when I found Beautiful Bright Smile (a teeth whitening system),” Kita told me.

With her newly acquired skills Kita was ready to open her own beauty studio. “I ran my new studio as a single mom and still worked a few part-time jobs.

“In 2018, my relationship with my (new) partner who lives in Toronto became more serious. I felt that I had done all I could do in Winnipeg, I was ready for somewhere bigger; so, I started looking to bring my business here,” said Kita.

When I asked Kita what brought her business to the Beach, she said it turned out to be luck. “I saw the space online and asked my partner to go look at it. He said the area was great, but we really didn’t have a clue!”

Suoy Suoy opened September 2019, and it wasn’t an easy start, especially with the onset of the pandemic around the corner.

But, through her social media presence and sheer determination, Kita has built her business a solid foundation. Suoy Suoy provides a wide range of beauty and health related services, but what Kita shared with me most was her free spirit and confidence.

Kita closed our interview with this: “My parents influenced me to go for more in life. They inspire me every day by their courage to leave their home country and start over. It is ingrained in my culture to take care of family and now that I’m older, that’s something I strive for as well.”