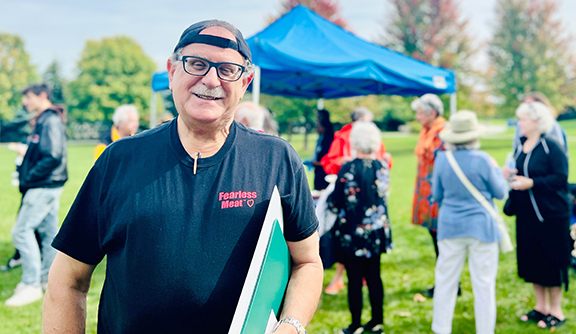 David Brown was presented with his 2022 Beach Citizen of the Year award during a ceremony on Saturday at the Millennium Garden in Woodbine Park. Photo by Erin Horrocks-Pope.

Members of the Beach community gathered at Woodbine Park’s Millennium Garden on Saturday to celebrate David Brown, a fellow local, the owner of Fearless Meat, and now in recognition of his outstanding community involvement and support, the most recipient of the Beach Citizen of the Year award.

The annual award, first presented in 2001, honours a community member who has shown a long-standing commitment to their neighbours and the community as a whole. The award is sponsored by Community Centre 55, the Beaches Lions Club, and Beach Metro Community News.

Brown was honoured at the Oct. 1 ceremony with words from his peers, including past award recipients Gene Domagla (2001), Pat Silver (2010), and Barbara Myrvold (2022), certificates and acknowledgements from local politicians, and the unveiling of a plaque on the Millennium Garden’s Walk of Fame.

The numerous reasons for Brown’s award were summarized by last year’s recipient, Barbara Myrvold, in her introduction of Brown. Some of those reasons included his long-time social activism, affordable housing initiatives, first-responder and veteran appreciation, fundraising, and his work done to support his fellow local businesses throughout the pandemic.

“David continues the tradition and example for others to open their hearts, time, wallets, and businesses to enhance the community,” said Myrvold.

She pointed out during her introduction that stories of Brown’s activism have been heard far beyond the Beach community as examples of how “one business, no matter how small or local, can demonstrate leadership in maintaining Canada as an inclusive society.”

Upon being presented the award by Myrvold, Brown expressed his gratitude to those who nominated him, voters, his family, customers and staff of Fearless Meat, the government representatives in attendance, and his now fellow Citizens of the Year and their legacies of community work.

“I want to thank all of you for your support, of me and of the restaurant,” said Brown. “I look forward to being an ambassador for the Beaches going forward and continuing this great Citizen of the Year tradition. Thank you all so much, and please, be Fearless.”