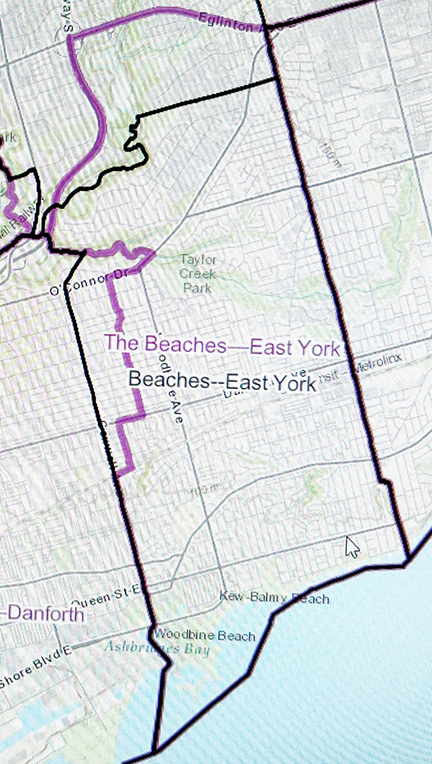 The proposal by the Federal Electoral Boundaries Commission for Ontario for a new electoral map has an East Toronto MP concerned that the city will be losing a seat and representation.

The Commission’s proposal alters the Beaches-East York riding boundaries slightly,  said Nathaniel Erskine-Smith, who is the Liberal MP for the riding.

While he said the impact locally on the riding is unlikey to impact future elections, he is concerned that the proposal for the province sees Toronto as a whole dropping from 25 to 24 federal ridings.

Under the Electoral Boundaries Readjustment Act, the Commission must re-access the electoral map every decade.

Redrawing the boundaries serves to divide the province into 122 districts that are close to the population quota which is calculated by dividing the population of the province by the number of electoral districts it has been allocated. Since the 2021 census revealed Ontario’s population has increased to 14,223,942 residents, that means the target quota for each riding is now 116,590 residents.

Although Beaches-East York would lose a small section of the riding east of Coxwell Avenue to Glebemount Avenue (from north of the railroad tracks), the current northern boundary would extend to Eglington Avenue. This proposal would put the riding’s population at 111,805.

“It would mean serving a larger number of constituents but I don’t think it would have a real impact on the next electoral race, other than causing some unnecessary confusion for residents between Coxwell and Glebemount,” said Erskine-Smith.

“For simplicity, Coxwell should remain the boundary.”

Erskine-Smith is comfortable with the potential changes to his riding, but is unsettled about the idea of losing a seat in Toronto at all.  Scarborough, which usually has six ridings, would lose Scarborough-Agincourt as a result of the proposed changes and go down to five ridings.

“As the chair of our 416 Liberal caucus, losing a riding in Scarborough is of concern to me,” said Erskine-Smith.

“We’ve seen an acknowledgment by the federal government that Quebec shouldn’t lose a seat, and I think the same argument holds true for Toronto.”

“I think the proposed name change is an unnecessary distraction, that we should keep it as it is, and that we should be focused in our efforts to maintain representation in our city,” he said.

Another point of concern for Erskine-Smith is the impact larger constituencies might have on his own office staff and service quality for his constituents.

“As it is, we have about half the budget of a Toronto city councillor, and our office staff are already stretched thin with immigration and other intensive case loads,” he said.

“The general goal should be to strengthen representation by population, and while Toronto may have grown less quickly over the last 10 years than other parts of the GTA, losing a riding in Toronto will still undermine that general goal when one considers existing riding sizes across the province and country,” said Erskine-Smith.

Toronto grew by only less than three per cent in the past five years, but the commission’s new map attempts to address the 1.3 million new residents in the province since 2011. The 2021 census shows that a lot of these residents live in the 905 suburbs outside of Toronto –one of the fastest growing areas in Canada.

“A ready alternative would be to increase the number of seats to accommodate more rapid growth in particular regions, without eliminating a seat and representation in Toronto,” said Erskine-Smith.

He added that Toronto’s past growth has not been adequately accounted for in previous electoral boundary processes.

Many MPs have voiced similar opinions about the proposed changes. They, along with any citizen who opposes the proposal, will have the opportunity to object at a mandated public hearing on the plans.

The first hearing, which is virtual, is scheduled for Monday, Sept. 26.

A link will be provided to participants after they complete the Public Hearing Participation Form at https://redecoupage-redistribution-2022.ca/com/on/phrg/form/index_e.aspx

The process reviewing the electoral boundary changes will continue until September 2023.