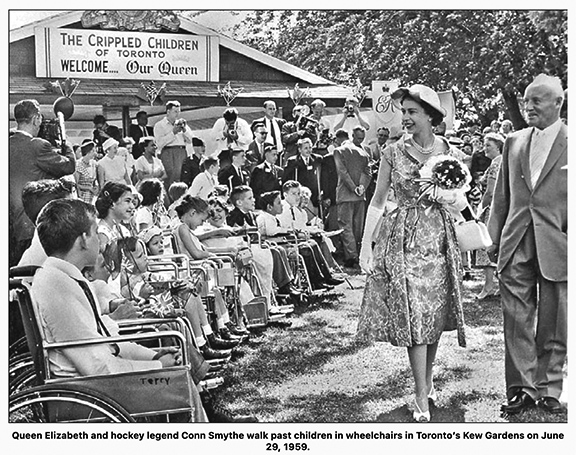 In this Toronto Star photo from June 29, 1959, Queen Elizabeth II is shown during a visit to Kew Gardens park in the Beach. The Beach and East Toronto Historical Society has the photo in its collection and shared it with Beach Metro Community News.

The Beach and East Toronto Historical Society has shared a photo of Her Majesty Queen Elizabeth II visiting Kew Gardens in the Beach in 1959.

At that visit to Kew Gardens in 1959, she met with children from what was then known as the Ontario Crippled Children’s Centre in Toronto. That organization is now known as Holland Bloorview.

In the photo, which originally appeared in the Toronto Star, Queen Elizabeth is walking with sports legend Conn Smythe who was the longtime owner of the Toronto Maple Leafs.

The Toronto Star story in 1959 was written by reporter Lotta Dempsey. In a look back to the Queen’s visit that year in a 2008 story in the Toronto Star it was noted that one of the children who was at the event in Kew Gardens on the day of the visit (June 29, 1959) was David Onley, who went on to become the Lieutenant Governor of Ontario from 2007 to 2014.

Age nine at the time, Onley can be seen in his wheelchair wearing a dark jacket and leaning forward.

“My grandfather, who was from Britain and a true-blue monarchist, said if his grandson was going to be seen by the Queen, you were certainly not going to be wearing just a shirt. It was going to be a blue blazer,” Onley told the Toronto Star’s Rob Ferguson in the 2008 story remembering the visit.

“I remember thinking she was so pretty. She just sort of swept by and smiled. I think if I was older I would have been nervous. Thankfully, as soon as it was over, they gave us lemonade.”

Prince Phillip, who died in April of 2021 at the age of 99, can also be seen in the photo. He is chatting with someone while facing away from the camera with his hands clasped behind his back.