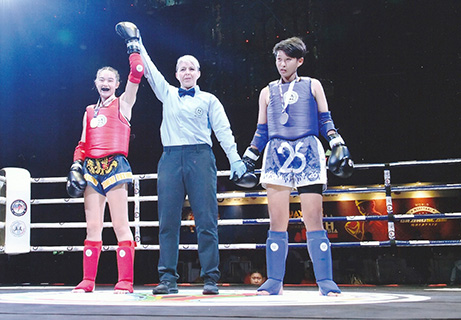 Nico Birch, left, is declared the winner after a muay thai bout at the World Gran Slam in Malaysia in August.

A Grade 12 student at Monarch Park Collegiate Institute, Birch is a member of the Stride Muay Thai club in Scarborough.

She and her Stride teammate Caelyn Sunga-Batac (from Markham) underwent two weeks of training at Sinbi Muay Thai in Phuket, Thailand, in advance of the world championships which saw 1,500 athletes compete at the event in Kuala Lumpur, Malaysia.

The nine-day competition saw Birch and Sunga-Batac face very experienced opponents who defeated them in their matches.

Both girls enjoyed the opening ceremonies for the world championships which featured a “splendour of colour” and dancers. The Prime Minister of Malaysia, Ismail Sabri, spoke at the ceremonies, and Birch was one of three athletes who were selected to deliver the Athletes’ Oath on stage at the opening event.

After the world championships, Birch also competed in Muay Thai World Grand Slam in Malaysia where she defeated a Thai opponent.

“Nico found the experience of competing against and interacting with Muay Thai athletes from all over the world amazingly rich and valuable, as was experiencing training in the sport’s birthplace of Thailand,” said her mom Heidi in a note to Beach Metro Community News.

“She looks forward to future competitions both far away and closer to home. Indeed she has already been signed up to compete in matches this fall across Ontario. Nico, Caelyn, their coach, and their families would like to thank the community for their support. Participating in the competition would not have been possible without the generous help they received.”