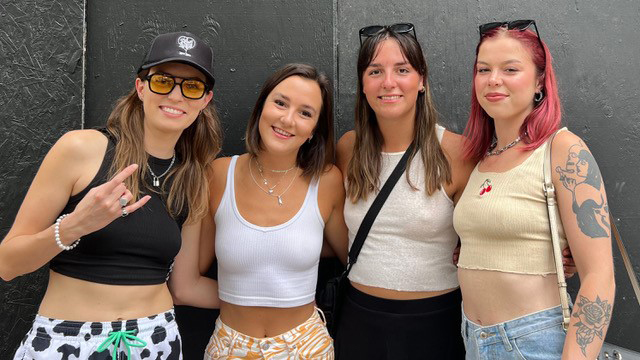 The Beaches band members, Leandra Earl, Kylie Miller, Jorden Miller and Eliza Enman McDaniel held a homecoming meet-and-greet with fans on Aug. 3 at Beaches Brewing Company on Queen Street East to launch a collaborative beer brand which will raise funds for Planned Parenthood in the United States. The event took place in advance of The Beaches homecoming concerts tonight and tomorrow at History. Photos by Erin Horrocks-Pope.

Local band The Beaches have launched a collaborative beer brand, ‘Grow Up Tomorrow’ with Beaches Brewing Company which will help raise funds for Planned Parenthood south of the border.

Members of the band, Leandra Earl (keyboard and guitar), Eliza Enman McDaniel (drums), and sisters Jorden Miller (vocals) and Kylie Miller (guitar) were at the Beaches Brewing Company on Queen Street East in the Beach on Wednesday, Aug. 3, to be welcomed home by their fans and celebrate the launch of their beer, a German-style Kolsch named after the band’s latest single which was released in July.

Carl Pratt, owner of the Beaches Brewing Company, reached out to the band in January to propose the partnership in celebration of their originally scheduled homecoming show at History in January. Unfortunately, the show was cancelled due to Covid-19 restrictions and the collaboration was put on hold until The Beaches would be able to officially return to the Beach for their shows tonight (Aug. 5) and Saturday, Aug. 6, at History on Queen Street East. “As soon as I heard they [The Beaches] would be playing at History, I knew I wanted to make a beer with them,” Pratt told Beach Metro Community News during Wednesday’s meet-and-greet at his brewery.

“What better way to celebrate their success and the pride the neighbourhood has in them and their own love of The Beaches community than by launching a local beer.”

When the band was approached by Pratt about this project, they were thrilled to get on board.

“It was a no-brainer to team up with Carl because what’s ‘Beachy-er’ than The Beaches celebrating our show in The Beaches with Beaches Brewery,” said Earl.

“A beer collab has always been a dream of ours and we’re so stoked that we get to share it with our community.”

Part of Pratt’s proposal for the collaboration would be that the band could pick a charity of their choice for proceeds to be donated to.

Considering the June 24 reversal of Roe v. Wade (a 1973 ruling which made abortion legal in the United States), the choice was clear to the members of the band to name Planned Parenthood as the recipient of the beer’s proceeds.

“We wanted to do something to show our support to the people in America who are now affected by the Supreme Court’s decision,” Jorden told Beach Metro Community News.

“Planned Parenthood is an excellent organization that provides assistance and help to women who are in a difficult spot.”

With the band embarking on their first headlining tour in the U.S. on Tuesday, Aug. 9, the members of The Beaches felt they had a duty to their U.S. fans, who largely fall into the demographic of women affected by the Supreme Court’s ruling, to use their platform to offer financial support and highlight the danger that this decision imposes on women across the country. The Beaches will play their first-ever homecoming show tonight at History, with a second performance scheduled for tomorrow.

McDaniel said that despite the milestones the band has achieved and surpassed over their years of playing together, these homecoming shows are a highlight in their careers and feel “super monumental” because of how close to home it is.

“We couldn’t be more excited,” she said. “We have so many memories of this whole area and it feels so amazing to celebrate with Toronto.”

McDaniel and the Miller sisters all grew up in locally and for Earl the community has become her “second home”.  All agree that the opening of History in the neighbourhood, and being able to play there, is an “amazing thing”.

Kylie, who grew up with her sister minutes away from where History is located on Queen Street East between Coxwell and Easter avenues, is delighted that the venue opened, bringing more live music and entertainment to the east end.

“To be playing at this incredible venue really feels like a milestone for us,” she said.

For more info on tonight and tomorrow’s concerts, please go to https://www.historytoronto.com/events/detail/the-beaches

Learn more about or donate to Planned Parenthood at https://www.plannedparenthood.org

For more info on The Beaches, please go to https://www.thebeachesband.com/#tour

For more info on the Beaches Brewing Company, please go to https://www.beachesbrewing.com

great article about some local talent…..but really poor spelling/grammar. Is anyone or anything editing?