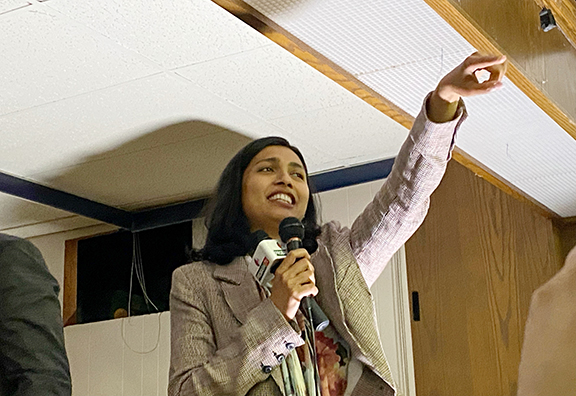 Doly Begum celebrates winning her second term as NDP MPP for Scarborough Southwest in the provincial election on June 3.

Scarborough Southwest MPP Doly Begum as been named as a deputy leader of the Ontario NDP.

The announcement was made on Wednesday, July 13, by the party’s interim leader Peter Tabuns (who is the MP for Toronto-Danforth).

Begum was elected to her second term as MPP for Scarborough Southwest in the June 3 provincial election.

The NDP is the Official Opposition in Queen’s Park to the Progressive Conservative Party which won its second straight majority government in last month’s provincial election.

“This is an immense privilege and responsibility that I don’t take lightly,” said Begum in her tweet.

“We’re committed to holding government accountable and ensuring Ontarians from all walks of life can have their voice hear in Queen’s Park.”

In the announcement of the appointments, Tabuns said the NDP will be putting positive proposals for all Ontario residents on the table at Queen’s Park.

“The NDP caucus is full of impressive community leaders with diverse backgrounds and lived experiences. I’m confident in our team’s ability to hold the Conservative government’s feet to the fire, and lay out a better way forward,” said Tabuns.

“We’re going to put positive proposals on the table to rebuild and improve health care, make life more affordable and make Ontario a place where everyday folks can build their best life. We’re going to fight to stop the cuts, fight for climate action, and work every day to close the gap between the very richest and the rest of us. We know who we stand with, and what we’re working for.”

The Ontario government is expected to resume sitting at Queen’s Park in August.