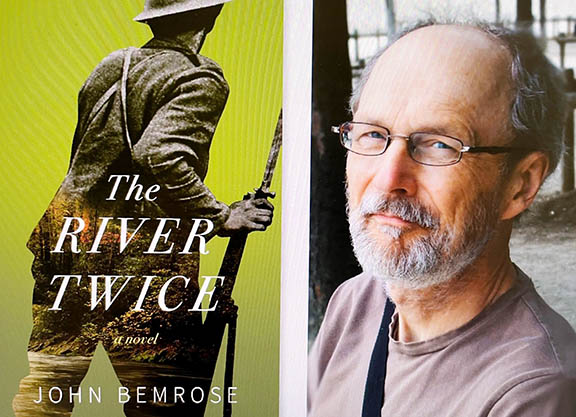 The River Twice is the second novel by East Toronto author John Bemrose. His first book, The Island Walkers, was a finalist for The Giller Prize in 2003.

Local author John Bemrose said that his latest novel, The River Twice, is a combination of his personal life, civilian encounters with veterans of the First World War, reading extensively on the subject and his experience as a writer.

“Travelling with my father on a local bus—this was in Paris, Ontario in the 1950s—I noticed a man sitting alone at the back,” said Bemrose. “Because he was shaking violently and jabbering loudly to himself, no one would sit near him. When we got off the bus my father, who knew the man, explained that he had shell shock from the ‘Great War.”

From this experience emerged both Bemrose’s lifelong interest in the First World War as well as his inspiration to write the novel The River Twice.

“As for the novel’s characters, some come at least partly from some aspect of myself,” he told Beach Metro Community News in a recent interview.

“Ted, the soldier who has been invalided home with shell shock or PTSD, draws on a certain residue of traumas from my own childhood. These were nothing on the scale of Ted’s suffering, but they gave me an understanding of him.”

The character Ted has a young brother-in-law named Will.

“Will … recalls my experiences in the rough and tumble schoolyard of Paris Central school.”

Bemrose grew up in Paris, Ontario, just outside Brantford.

“Paris, Ontario, has been central to my life as a fiction writer,” said Bemrose who lived in the town until he was 20.

“The Island Walkers, my bestselling 2003 novel, took its setting and many of its characters from there, and now The River Twice has as well.”

Along with a look back at his hometown, The River Twice also talks about the horrors soldiers had to deal with while fighting in the First World War.

“The hardest scenes to write were those set in the battlefields of France and Belgium,” said Bemrose.

“But the Great War never came more alive for me than when I visited those battlefields in person, in the summer of 2018. Seeing the remains of the trenches, the vast graveyards, the great Canadian memorial on Vimy Ridge, was very moving; and it lent fresh passion to my writing.”

Bemrose said that for him, the key to successful writing is being patient and keeping an even keel.

“In my early, unpublished days as a writer of fiction, I tended to be impatient—to write in great bursts of enthusiasm followed by violent dissatisfaction with what I’d done,” he explained.

“With time I’ve learned to keep a more even keel, never letting myself get too high or too low. I have also become more patient, understanding that failure is part of the process of investigation and experimentation by which the writing of a novel proceeds.”

“In some ways the writing of The River Twice was easier (than the writing of The Island Walkers). There are nearly 20 years between those books, and in that time I’ve become a more fluent writer, able to achieve my intended effects much more readily,” said Bemrose. “And so the process of experimentation and revision is now a much more natural thing — a quicker and easier thing.”

At this point, Bemrose is not sure what he will be doing next as a writer.

“So far, nothing has strongly suggested itself. Perhaps I’ll turn to short stories, a form I love, and I would like to write a memoir of my family and its century in Paris. I guess I’m not ready to escape the place just yet.”

The River Twice is published by Thistledown Press. Locally copies can be purchased at Book City, 1950 Queen St. E. in the Beach.