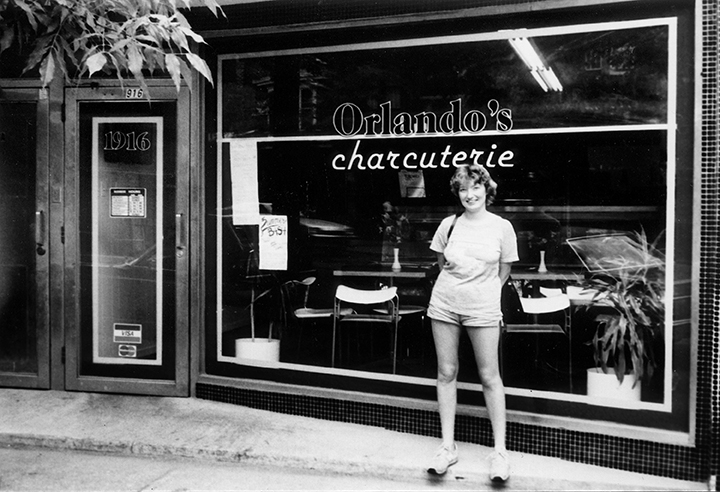 Photo above, taken by Jeremy Tillcock, shows Jan in front of what was Orlando's Charcuterie in the 1980s. Inset photo, taken by David Van Dyke, shows Jan in the same spot on Queen Street East recently.

I thought I’d give writing duties over to Jan who sent me this photograph (above) that her husband took of her in the early 1980s.

The facade on this retail space at 1916 Queen Street East hasn’t changed a bit!

It was wonderful to meet you and your husband Jan, thanks for contacting us.

The top photo was taken in the 1980s by Jeremy Tillcock. The photo in front of the Beachwood Flower Shop was taken by me recently. “I graduated from the Classical Animation program at Sheridan College in Oakville and immediately started working for various studios in Toronto. When the feature film I was on finished in 1982, the local animation scene dried up. Casting around for some other endeavour, I signed up for the baking course at George Brown College because of my love of baking.

“Part of the program involved a co-op stint with a local business. I was placed at Orlando’s where I baked tortes, pies, and cheesecakes, and prepared pâtés. I remember it as a fun time. My boyfriend (now my husband) took the photo of me in front of the shop. The animation scene revived soon after that, though, and I returned to my original vocation.

“I retired in 2019 after nearly 40 years in the animation business. The highlight of my career was my six months in Paris working on an Asterix feature film. I managed to find time to have a husband of 36 years and a wonderful son. We’ve been East Enders for over 40 years now. You may see us haunting Muskoka chairs on the beach or certain patios on Queen.”