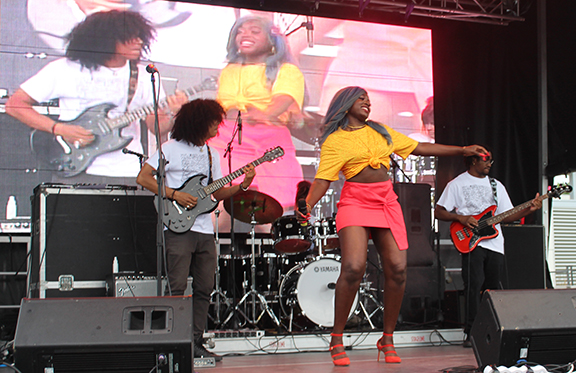 Imah performs at the Afrofest Showcase concert as part of last year’s Beaches International Jazz Festival. The drive-in concert took place at the Guildwood GO Station as part of the two-day Afrofest Showcase. This year, the 34th annual version of the Beaches International Jazz Festival is firmly back in the Beach with numerous events planned for this July.

The 34th annual Beaches International Jazz Festival is back in East Toronto this summer as an in-person event.

After two years of having to create a festival which was a mix of virtual and live events in some non-traditional locations due to the COVID-19 pandemic, the 2022 version of the festival is back this July in its full glory and with all of the events that make it so popular including the Streetfest.

In an earlier interview with Beach Metro Community News, Beaches International Jazz Festival founder Lido Chilelli said he and every person involved with the festival is thrilled to have it back next month as a live event.

“All the musicians are really looking forward to performing again in front of audiences; getting the engagement and applause and seeing people up and dancing,” said Chilelli.

The 2022 Beaches International Jazz Festival has events scheduled from Saturday, July 2 through to Sunday, July 24.

Woodbine Park will be the centre for most of the musical action, with the Salsa on the Beach (July 2 and 3), Main Stage weekends (July 8 to 10, and July 22 to 24) taking place there.

Also planned for the festival this July will be The Sounds of Leslieville and Riverside from July 8 to 10, and the always popular Streetfest along Queen Street East in the Beach from July 21 to 23.

Also slated is the Workshop Series at Beach United Church on July 18, 19 and 20.

As in past years, admission to the festival events is free. Here’s the rundown on events set July’s Beaches International Jazz Festival:

TD Salsa on the Beach – Saturday, July 2, and Sunday, July 3, at Woodbine Park

This year’s festival opens with the TD Salsa on the Beach with performances set for the afternoons and evenings of July 2 and 3.

The fun begins on Saturday, July 2, with DJ Victor Explosivo at 3 p.m.; followed by a Salsa class with Daylin Martinez at 3:30 p.m. The rest of Saturday’s performers will be El Sol De Cuba at 5 p.m.; Ricardo Barboza and Orq. – Tributo Dimension Latina at 7 p.m.; and La Sanora Queen – Highlight at 9 p.m.

The Sounds event will consist of our four sections, including the Riverside Common Stage (657 Queen St. E.); the Main Stage at Jimmie Simpson Park (870 Queen St. E.); and the Big Band Stage at Leslie Grove Park (1158 Queen St. E.). There will also be The Richards Group Queen Street East Block Party with performances at a number of locations.

The Riverside Common Stage will be open July 8 and 9 from 7 to 11 p.m. with performances by the Jerome Tucker Band and Reggaddiction.
The Main Stage at Jimmie Simpson Park sees performances slated for July 8, 9 and 10.

The Big Band Stage at Leslie Grove Park has performances slated for July 9 and 10.

The fun gets underway at noon on July 9 at Leslie Grove with Swing Dance lessons with Swing Toronto. After that, there will be performances by Martin Loomer’s Orange Devils at 1 p.m.; The Advocates Big Band at 3:30 p.m.; and the Swing Shift Big Band at 5 p.m.

The Sunday, July 10, lineup at Leslie Grove Park also begins at noon with the dance lessons followed by The Composers Collective Big Band Collective at 1 p.m.; and The Jazz Mechanics at 3:45 p.m.

For more info on The Sounds of Leslieville and Riverside specifically, please go to www.beachesjazz.com/sounds-of-leslieville-riverside

For the weekend of July 15 to 17, the jazz festival moves to Main Stage performances at Woodbine Park with the TD Weekend.

The music begins Friday, July 15, night with Rice & Mango at 7 p.m.: followed by Brass Transit (The Musical Legacy of Chicago) at 9 p.m.

On Saturday, July 16, performers are Maya Kiltron at 3 p.m.; Johnny Rawls and The Maple Blues Band at 5 p.m.; My Son the Hurricane at 7 p.m.; and Everyday People: A Tribute to Sly and the Family Stone at 9 p.m.

The TD Workshop Series will feature an opportunity for music fans to take in an intimate concert and then some conversation with some of Toronto’s most interesting jazz musicians. The three free concerts are slated for 7 to 9 p.m. on the nights of July 18, 19 and 20 at Beach United Church, 140 Wineva Ave.

The July 18 concert will be by the Larnell Lewis Band. Based in Toronto, Lewis is a Grammy Award winning musician, composer, producer and educator.

The July 19 concert will be by Juno Award-nominated vocalist Heather Bambrick.

The July 20 concert will be by Caribbean Jazz Collective, an ensemble made up of some of Canada’s best jazz artists representing our country’s diverse Caribbean diaspora. Members of the Collective include Eddie Bullen, Joaquin Nunez Hidalgo, Gareth Burgess, Neal Braithwaite and Andrew Stewart.

Seating is limited for these Listen and Learn Concerts, and those wishing to attend are asked to please make sure they register in advance by going to www.beachesjazz.com/td-workshops

The hugely popular StreetFest is back along Queen Street East in the Beach between Woodbine and Beech avenues from 6 to 11 p.m. on the nights of July 21 through July 23.

More than 30 bands will be performing at numerous Queen Street East locations over the three nights of StreetFest. For a complete list of locations and bands performing, please go to www.beachesjazz.com/streetfest

As in the years before COVID-19, StreetFest will see Queen Street East between Woodbine and Beech avenues closed to vehicular traffic to make room for the crowds of music fans. The closure is in effect from 6 p.m. to 11:59 p.m on all three nights of StreetFest. Also vehicles will not allowed to be parked on Queen Street East in the area to be closed after 4 p.m. on July 21, 22 and 23 or they will be towed.

Please note also for StreetFest that the route of the Main Street 64 bus will be changed to avoid Queen Street East.

For safety and access reasons, Waverly Road, Lee Avenue and Wineva Avenue will open for through way traffic heading north and south from Queen Street East.

The Beaches International Jazz Festival wraps up with Main Stage performances at Woodbine Park as part of the OLG Weekend Series.

NuFunk.ca’s sixth annual Groovin’ in the Park Friday Night Vibes celebration goes from 7 p.m. to 11 p.m. on July 22. The event is presented by The Main Ingredient supported by Hot Stepper and will feature performances by the WhatNaut Band (celebrating their 20th anniversary), Carlos & Pedro (Hot Stepper), Dave Campbell and Kwame, Mike Tull and Jason Palma; The Return, and DJ Mensa and Agile.

For more on the Beaches International Jazz Festival, visit https://www.beachesjazz.com/