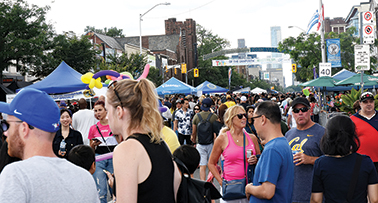 Crowds gather on Danforth Avenue for the 2019 Taste of the Danforth in this Beach Metro Community News file photo.

The Taste of the Danforth festival will not be taking place this summer.

Earlier this year, it was expected that the long-running street festival that takes place in GreekTown on the Danforth in August and brings in more than a million visitors would be happening in 2022 after a two-year break due to the COVID-19 pandemic.

However, some concerns began to be raised in the spring regarding the City of Toronto’s CafeTO outdoor patio program and bike lanes along Danforth Avenue and how they would impact available space for Taste of the Danforth.

In a statement released on June 22 by the GreekTown on the Danforth BIA, which organizes Taste of the Danforth, it was announced that the 2022 event would not be taking place.

Instead, organizers and the City of Toronto will work towards “re-imagining” Taste of the Danforth for the summer of 2023.

“GreekTown on the Danforth Business Improvement Area’s Board of Management has determined the best way to ensure the long-term success of the festival is to postpone restarting it until 2023,” said the statement.

“The short timeline available to adapt the event to the changes in the street meant that Taste of the Danforth in 2022 was at too great a risk of not being as successful as in the past. Our membership and the broader community have high expectations of a great event.”

Prior to the June 22 announcement, Toronto-Danforth Councillor Paula Fletcher had said she was committed to having Taste of the Danforth take place this August.

“Everyone loves The Taste. It is a signature event for Toronto we have all missed so much,” she said in her statement on June 1. “The creativity and smarts for which Toronto is so well known can be put to work to make sure that everyone can look forward to enjoying a great experience on the Danforth this summer.”

However, the challenges just proved to be too many and that was what led to the GreekTown on the Danforth BIA’s decision to put it off until 2023.

“We know planning an event of this size and scale will take time,” said the BIA’s June 22 statement. “It was unclear during the winter months whether public health conditions would allow for Taste of the Danforth to take place. Once it became clear we could, there just wasn’t time imagine Taste of the Danforth for 2022 given changes to the streetscape. So now we’re going to take the time, working hand in hand with the City and all our partners, to put on the best Taste of the Danforth in 2023.”

The BIA’s statement went on to say that GreekTown is still a vibrant place to visit for both Torontonians and tourists during the summer  “That has not changed. This summer, the BIA will bring exciting localized events to GreekTown where the spirit of music, the love of food, and the incredible people who make the Danforth the special place that it is, are celebrated.”

Everyone is also invited to enjoy the outdoor patios along all of Danforth Avenue this summer.

“We invited everyone to partake in our vibrant patio culture with food from every corner of the world as part of the enhanced CafeTO patio program,” said the BIA’s statement.

“There will also be live music at may patio locations along the Danforth, made possible with BIA support through the City’s renewed Amplified Music on Patios pilot program and our public art program through ArtworxTO’s Local Discoveries program.”

In a statement to CTV News Toronto on June 22, Fletcher said she respects the decision made by the BIA and she is now also looking forward to the 2023 version of Taste of the Danforth.