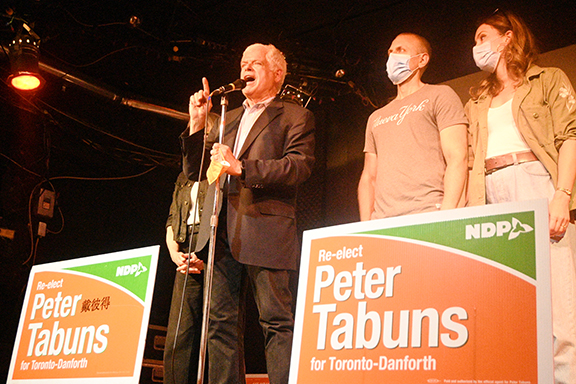 Peter Tabuns speaks at his campaign victory party at The Duke on Thursday, June 2. Tabuns was once again re-elected as the NDP MPP for Toronto-Danforth in the provincial election. Photo by Alexandros Varoutas.

Peter Tabuns of the NDP has been elected once again as the MPP for Toronto-Danforth in the Thursday, June 2 ,provincial election.

Tabuns was first elected Toronto-Danforth’s MPP in what is considered one of the province’s strongest NDP ridings in a byelection in 2006. Prior to that the riding was held by the NDP’s Marilyn Churley. Under a number of different riding names, the area has been solidly NDP provincially since the mid 1970s.

Tabuns feels good about the powerful response he received in his riding after running a “strong, clean” election, but is left frustrated about the re-election of Doug Ford and the Progressive Conservatives to a second majority.

“This is not a government that should be running Ontario,” Tabuns said.

Chief among his worries are the party’s “backwards” stance on issues such as the environment, equity, and workers’ rights. He also cites the party’s negligence in long-term care homes that he feels led to thousands of avoidable deaths.

“I think that their popularity is not going to last. I think that the arrogance that they showed at the beginning of their term, the disinterest in the needs of common people will become manifest in the next four years,” said Tabuns.

Looking to his own riding, though, Tabuns is eager to get back to work. The upcoming Ontario Line will be one of the defining issues of his term as he continues to advocate for residents in the area as the project moves forward. Affordable housing is also front of mind, he said.

Tabuns is also focusing on the growing number of new families in the area and their needs. Not just through education and childcare, but also the climate crisis which he said will affect the next generation even more than it is affecting this one.