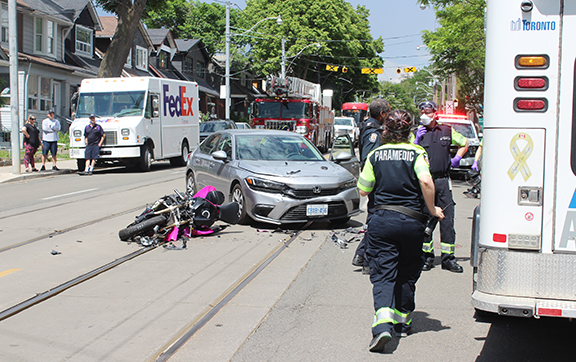 A motorcyclist was taken to hospital with serious injuries after this collision on Gerrard Street East at Ladykirk Avenue on the afternoon of Friday, June 3. Photo by Alan Shackleton.

A female motorcyclist has been seriously injured after a collision with a car on Gerrard Street East, between Coxwell and Woodbine avenues, this afternoon.

An eastbound motorcycle driven by a woman and a westbound Honda sedan collided. The driver of the motorcycle was thrown from the bike and over the car.

She was taken by emergency run to a hospital trauma centre. The extent of her injuries are not known but appeared to be very serious.

The cause of the collision is under investigation by police.

UPDATE: Police said in a news release on June 4 that the motorcyclist’s injuries are considered to be life threatening. Police are asking witnesses to the crash to contact the traffic services unit at 416-808-1900. Also, anyone who may have dashcam or security camera images from the area around the time of the crash is asked to contact police at the same phone number. Police can also be contacted anonymously through Crime Stoppers at 416-222-8477 or online at https://www.222tips.com