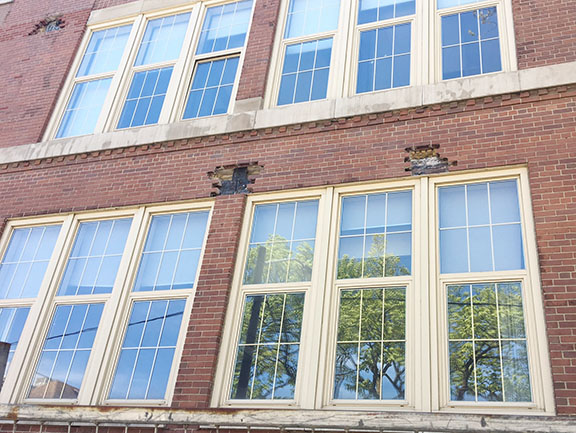 Holes in the east-side wall of Malvern Collegiate Institute have been made for an inspection of 'cluster columns' which are part of the structural system.

Work taking place on the east side wall at Malvern Collegiate Institute is being done to inspect the masonry and steel beams that support the school’s roof.

The work began more than a month ago and consists of crews removing sections of bricks in the wall to examine the “cluster columns”.

According to a statement sent to Beach Metro Community News from the Toronto District School Board, the use of cluster columns was a typical structural system used in the building of schools from the late 1800s through to the 1940s.

Construction on the Malvern Collegiate building began in 1905 and it opened in 1906, though the high school had been in a different location from 1903 on when it was known as East Toronto High School.

The cluster column system “relied on steel columns built within the window bays to provide multiple lines of support for the lintels above,” said the TDSB. A lintel is a type of beam installed above a window or door that spans the opening of the wall.

“Typically, the columns were encased in wood and were installed in line with the vertical window mullions, which a ‘cluster’ of columns equal to the number of mullions in that bay,” said the TDSB.

“Working together, the lintels and cluster columns transfer the loads imposed by the building’s roof and floor slabs to the basement. This requires the cluster columns to be continuous along with the height of the building, not just at the window bays. In-between the window bays the columns were built into the exterior of the multi-wythe masonry walls, which was the typical construction of the period.”

As part of the work being done at Malvern this month, bricks and masonry were removed in certain sections so a structural engineer could inspect the cluster columns as part of a regular review.

“As the initial investigation is still ongoing, it is too early to tell what, if any, restoration work is required,” the TDSB said. “This investigation at Malvern is a part of the board-wide multi-year cluster column review program.”