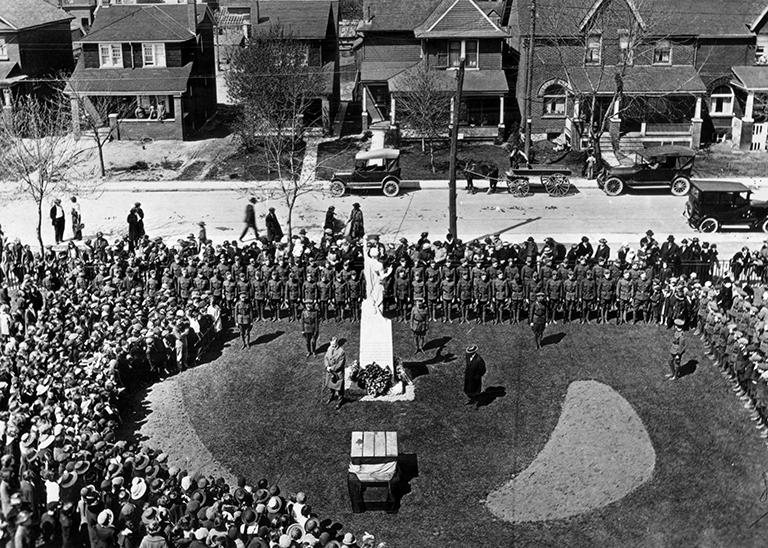 This archive photo shows the dedication ceremony for the war memorial cenotaph in front of Malvern Collegiate on May 19, 1922. On Monday, May 24, a ceremony to mark the 100th anniversary of the Malvern cenotaph will take place.

One hundred years ago this month, on May 19, 1922, the Beach community gathered to dedicate a memorial to 25 alumni of Malvern Collegiate Institute killed in the First World War.

It was a ceremony being repeated all across Canada as communities large and small honoured the sacrifice of those who fell in what was then the greatest conflict in history – “The Great War”.

On May 24, 2022, the community will gather again to mark the 100th anniversary of the dedication of the cenotaph. An outdoor ceremony beginning at 10 a.m. will feature local dignitaries, guest speakers and students reading out the names of the men whose names adorn the base of the statue, along with performances by the Malvern band and choir. A livestream of the event will also be broadcast to students in their classrooms.

The students, alumni and staff of Malvern organized a fundraising campaign in 1921 and the committee in charge chose a design by Emanuel Hahn, noted Canadian sculptor, from Toronto’s Thomson Monument Co. A twin of the memorial was also chosen by the town of Alvinston, Ontario, and the existence of that duplicate made it possible to restore the Malvern monument in 2011, including reattaching the broken right hand of the young man and replacing the sword he held, which had been stolen years earlier.

Since that restoration, vandals again attacked the memorial, scraping off some of the lettering of men’s names and stealing the sword in two separate incidents.

The event on May 24 will also serve as the launch of a new campaign to repair the monument and upgrade security measures to ward off future vandals.

This project will not be a full restoration, which was done in 2011, but will include sculpting a new sword and replacing some of the hand-crafted lead lettering that was damaged when vandals climbed on it.

Members of the community are welcome to attend and those interested can RSVP by visiting the Malvern Red & Black Society website at https://malverncollegiate.com/

Malvern Collegiate’s cenotaph is located on the school’s west side, on Malvern Avenue, between Swanwick and Lyall avenues.