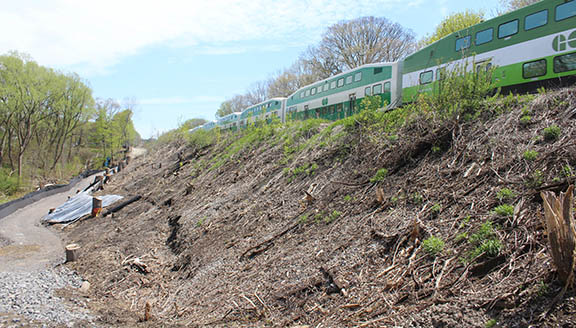 Photo: alan shackleton A GO Train makes its way along the Lake Shore East Line above Small’s Creek Ravine which is just west of Woodbine Avenue and south of Danforth Avenue. The stumps of trees that were recently cut in the ravine for the expansion of the rail line to four tracks can be seen in the photo above and the inset photo.

The following analysis is by Stephen Wickens, a retired journalist and transportation researcher.

Even Andrea Horwath’s NDP, which has focused on consensus top issues – health care, education, pandemic response and housing – has indicated that, if elected, provincial subsidies for transit operations will resume after a quarter-century hiatus, and that big changes are coming for the ‘public-private partnership’ approach to infrastructure procurement.

So how can voters across Ontario – and East Enders in particular – decode transit-related promises and rhetoric in a year with provincial and city elections?

It’s probably best we start with six facts that are largely below the radar.

1.) Per-kilometre subway-building costs (even after adjusting for inflation) have doubled since Ford’s Progressive Conservatives had provincial agencies take over project planning and delivery from the Toronto Transit Commission (which itself let costs soar on the extension to Vaughan that opened in 2017).

2.) Costs will seriously exceed benefits on the Premier’s chosen subway projects in Toronto, even according to questionable analyses produced by Metrolinx (the agency charged with co-ordinating transit in the Greater Toronto-Hamilton Area).

3.) Ottawa and the province, which control the major tax-revenue streams, are fixated on capital projects even though operations – funded almost totally by fares and municipal property taxes – matter more to overall service quality. Frequent buses and streetcars might not buy votes, but the attractiveness of the whole transit network relies on them.

4.) The two biggest transit systems in the GTA by far – the TTC and GO – operate almost entirely in isolation from one another within 416. The arrangement made sense in the 1960s, when GO was launched and the TTC was ineligible for operating subsidies and didn’t want competition on its turf, but it has been counterproductive for decades.

5.) Transit riders do more to reduce road congestion than anyone, but politicians have been sticking it to them for decades with fare hikes and service cuts. Monthly passes cost nearly twice as much as they would if they’d been held to the inflation rate over the past 40 years.

6.) Many Beach Metro Community News readers live too far east to benefit much from the Ontario Line (a decades overdue new subway from the Ontario Science Centre to downtown via Pape Station). Most locals are also too far west to avoid renewed crowding on the Danforth subway if ridership returns to pre-COVID levels – especially if the under-construction extension from Kennedy to Sheppard East succeeds in luring more Scarborough residents to transit. (Long-term data show stations west of Warden have been losing ridership in recent decades as trains fill up faster and faster at Kennedy).

Everyone has biases: Mine (which I prefer to call informed opinion) include a strong sense all three major parties have decades of fingerprints on the GTA transit mess. I’ve also concluded we must – for economic reasons as much as environmental ones – stop channeling growth into road-enabled sprawl, a view that puts me at odds with the incumbent government’s plans to build more highways that undermine the public’s returns on transit spending.

We could commend the Ford government and its Liberal predecessors for breaking a multi-decade logjam on subway building, but there’s huge danger in a now established process that ignores data and experts (something that echoes pandemic-response woes).

As a result, three transit projects that we’re largely locked into – the Line 2 extension in Scarborough, the North Yonge extension into York Region and the Eglinton West extension – involve costly deep tunnelling through low-density areas, something that’s avoided in world cities with intricate rapid-transit maps that make Canadians envious.

Tourists rarely see it, but 55 per cent of the London Underground is above ground, and back when Toronto was very good at subway building we relied heavily on shallow box tunnels and open-air stretches, even in the core.

And costly deep tunnels aside, plans to lengthen subways rather than use electrified GO-system upgrades to serve suburbs – especially York Region and north Scarborough – have been criticized by planners I’ve come to respect most (retired ones free to speak truth without jeopardizing their careers and current industry professionals who talk to me on the promise of anonymity).

Little has changed since retired and much respected planner David Crowley told The Globe and Mail in 2017 that “data and demand patterns are telling us the stupidest thing we could do is make any of our [existing subway] lines longer.” (Crowley is also a York Region resident who might be expected to back a longer Yonge Line).

Some politicians tell us the best transit is the stuff that gets built, but Toronto history shows poorly conceived projects with high costs and low yields of new ridership undermine the broader political will to fund even the most necessary subways. We could argue that wasteful projects led directly to the infrastructure logjam in the first place.

So what transit-related questions should voters put to candidates?

1.) Provincially, everyone should be concerned about the soaring costs of subway building. Ford should have put tough questions to Metrolinx and Infrastructure Ontario before rolling out his transit plans, but we also need to know why the NDP, Liberals and Greens didn’t bother grilling his government on this issue in the legislature before tunnelling contracts were signed.

2.) All Ontarians need to ask why Metrolinx – which was to be an arm’s-length agency speaking truth to power and helping cabinet make evidence-based decisions – became a secretive vote-buying tool for whichever party is in power, manufacturing decision-based evidence to promote partisan schemes that handcuff future governments. The agency employs many good people, but until its experts can speak freely without imperiling their careers, the long-running transit train wreck will continue. Ask candidates how they feel about restructuring Metrolinx so it can be transparent and report to the legislature as a whole, never meeting with politicians unless all parties are in the room. Will any party commit to putting a few impartial people with transit expertise on the Metrolinx board?

3.) Voters in Toronto need elected representatives pushing Metrolinx to finally think seriously beyond GO’s narrow traditional role of linking 905 commuters to Union Station. There are reasons why ridership out of GO’s Danforth, Scarborough and Kennedy stations is puny even though GO’s Lakeshore East line parallels an overloaded subway. A good start – something more sustainable than the Liberals’ buck-a-ride promise – is the NDP’s promise, announced this past weekend, to make all trips that start and end in Toronto available at a flat TTC fare. It would make many TTC bus routes (and any service improvements) more valuable, rescue Scarborough residents facing next year’s SRT shutdown and help GO fill trains post-pandemic, especially when the GO Expansion project offers more frequent service. GO’s timid pre-pandemic toe dip into the waters of lower fares for short trips should have shown them a full plunge makes sense. 4.) In the East End, voters need to demand much more of the GO Expansion project than a fourth track through our local corridor and a switch to nimbler and somewhat quieter electric trains. Even before Metrolinx ran roughshod over the environmentally sensitive Small’s Creek Ravine, it and its GO division had established themselves as bad neighbours, offering little more than noise, a linear barrier that undercuts walkability and local economies, and too few stations to access services. GO ignored pleas to think long term only a few years ago when the third track was added. This time, there are no plans to ensure the project is scalable and future-proofed. There should be provisions to ensure future stations at Gerrard Square, Coxwell-Monarch Park and Warden or Birchmount can be added quickly and inexpensively. We owe it to future East Enders. Metrolinx’s CEO has even mused about opting for a penny-wise pound-foolish approach to the junction where the Lakeshore East and Stouffville lines meet. All of Scarborough has a vested interest in thinking long-term and getting the junction right.

My priorities haven’t changed much since I was asked in 1999 to offer recommendations to the Greater Toronto Services Board (a Metrolinx predecessor). But two of my top three suggestions – European-style GO network upgrades (electrification with tighter station spacing) and a new subway through the core – are finally in the works, even if they’re not being planned as wisely as possible. My third recommendation back then, TTC-GO fare integration, could make some party’s platform soon.

The point is that change and attempts to get agencies and politicians to simply listen take time.

But the more we make the effort to inform ourselves and endure inevitable frustrations, the tougher it is for candidates to ignore us.

Election years are too valuable to waste.

Stephen Wickens is a retired journalist and transportation researcher. All four parties have sought his advice over the years. He is the author of Station to Station, Why Subway-building Costs Have Soared in the Toronto Region. www.rccao.com/research/files/RCCAO-STATION-TO-STATION-REPORT-APRIL2020.pdf
He can be followed on Twitter @stephenwickens1

A fabulous summary of current and (inevitable) future trabsit problems in this fast-expanding metropolis, Sadly, pit is unlikely that any of the logic will influence the powers that be, especially the government now in power. Whereas the “Station to Station” report Steve wrote made many stop and think, one would never know it from the so-called master planning now entering the construction phase. Whereas the alignment of the Ontario Line makes sense, far too many of its physical and operational characteristics remain undefined, and make old-time transportation planners cringe.(e.g. why a wholly new technology and not a subway?).