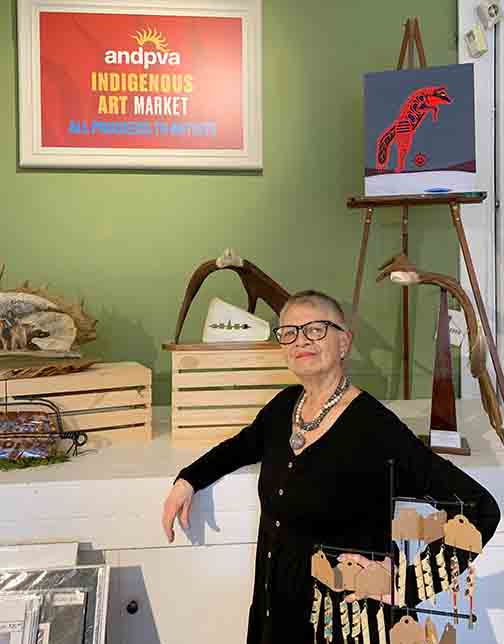 Leslieville resident and artist Barb Nahwegahbow is the curator and co-ordinator of the ANDPVA (Association for Native Development in the Performing and Visual Arts) Market on Queen Street East. Photo by Mimi Liliefeldt.

Ignorance is not bliss. At this stage in history, our ignorance surrounding the experiences of Indigenous people in Canada is unacceptable.

Casting shame is never the point of this column. However, it was my own feelings of embarrassing inadequacy that emphasized how little I know about the people who have cared for our land far longer and better than we have.

For decades we have heard about the horrors Indigenous people have had to live through; the many missing women, the discoveries of mass graves at Residential Schools, and the countless children that were taken away from their families, to name only a few. We may have even had thoughtful discussions on how our societies are so divided, but none of this was really about learning or taking action.

Resilience is a word that comes up a lot when we speak of the abominations Indigenous people have had to endure. Resilience is how we adapt and rebound from adversity.

Having said this, no one actually wants to have to face adversity, but either by misfortune or cruel intention it is often thrown in our path. Indigenous people in Canada have the burden of having to prove their resilience over and over throughout history.

The time to hear their stories and take action is long overdue.

Barb Nahwegahbow is an artist and resident of Leslieville. She is also the curator and co-ordinator of the ANDPVA (Association for Native Development in the Performing and Visual Arts) Market.

Barb shared everything from her experience of growing up on a small reserve near Manitoulin Island, to moving to Toronto and spending her career advocating for her Indigenous community.

“I am Anishinaabe, also known as Ojibway. Where I grew up was a very small place, probably about 300-400 people. My mother had 12 kids; one didn’t survive. I went to school on the reserve, and then later on we were bussed into Espanola for high school,” Barb told me.

Espanola was a non-Indigenous town of which the majority were white people. “There was racism, but there was also acceptance. I was voted prom queen by the student body.”

The unexpected value of being chosen prom queen revealed itself many years later when Barb was working on a program for Residential School survivors.

“There were some people from my area (where she grew up) and when I introduced myself, one lady said, ‘I know who you are! You were prom queen in high school!’ I asked her how she would remember that from some 40 years ago? She said, ‘that was so important because it was a Native girl’. I never thought about that,” Barb admitted.

In retrospect, it’s easier to understand how much that would mean to someone. How important it is to see ourselves reflected in elevated societal positions, no matter how frivolous seeming prom queen might be.

“I moved to Sudbury and then Toronto in 1971 and took Social Services at Humber College. Education for us was always very important to my parents, they saw that as a way out of poverty. I decided early on that I wanted to work with my own community,” Barb told me.

After graduating, she worked for various organizations for the care and betterment of Indigenous peoples.

“I worked in Child and Family Services, I was developing Native foster homes, Native homemaker services, and Native group homes. Then I went into vocational rehabilitation, it was a very supportive environment. I was working with a halfway house for Native people with substance abuse problems.”

Barb also went on to work for the provincial government in community development, then got the role of executive director of the Native Canadian Centre. After five years she left the NCC and went back to university and attained her B.A in philosophy and political science.

After graduating university, she took a job as the executive director of Anishinaabe Health Toronto. There she developed a number of cultural programs and added traditional healers who could provide patients help with any number of physical, emotional and spiritual issues.

With Barb’s wide expanse of work for Indigenous people in public and government roles, I asked if she ever came across much resistance. Her response was this: “Oh yeah, individual acts of racism, but the systemic racism….” Her voice trailed off and she went into a story of when she confronted her boss who had suggested she was too biased when she said positive things regarding Indigenous folks.

Barb had said to her boss, “How come this guy who works for the Ministry of Natural Resources is allowed to be biased against Indigenous people? Why is that allowed?” Her boss didn’t respond and simply walked into his office.

This interaction may seem small, but it illustrates the corrosive beliefs that colonization has instilled and held onto in society about Indigenous people. The damaging assumptions and messaging are that they do not deserve to have the same rights and dignities.

One of the things Barb is most proud of is the spirit of her community and especially in the artists who contribute to the ANDPVA Market.

“When I come in this store every single day and I see all that our artists have created… Every piece is beautiful, and I think after all the sh** that we’ve been through, we are still capable of creating and seeing the incredible beauty in life. And if that isn’t resilience, I don’t know what is.”

The market began as a two-month Christmas pop up idea in Leslieville by her friend Marcos, an Indigenous artist from Ecuador. He approached Barb with the suggestion knowing she had years of experience running an annual art market that she started, called Indigenous and Ingenious.

The holiday market was so successful, they reopened in March and are currently at their Leslieville location on Queen Street East at Caroline Avenue until end of June. The best part of the ANDPVA market is that all the items are Indigenous made and the artists get 100 per cent of their sales.

The store is full of beautiful, beaded jewelry, hand-painted art, amazing collage photography, and textiles. But it’s so much more than a pop-up store; it’s a display of Indigenous creativity, perseverance and a window into a world and way of life that has been shut out for too many years.

Barb told me, “A woman came in a while ago and she was connected with the Catholic Church, this was shortly after the Pope’s apology. She wanted to know who they should talk to about where her church group could put their money. So, I gave her a couple of names, but then I also told her, ‘there’s no such thing as a free lunch. I expect you to buy something before you leave here, because I’ve given you information.’”

Some may read this and be taken aback, but it’s important to remember the history of what’s transpired and the value of reciprocity.

Most people say they want to help or do their part in helping to restore balance in our relationships with the Indigenous community, but they have no idea where to start. This is easy, if you walk into the store, know that you are walking into an enlightenment. If you are open, you will learn or see something new and interesting. But also realize, this education shouldn’t be free.

These artists have worked hard and deserve your support. They are not asking for a handout; they have made stunning creations and you have been given a tiny glimpse into their world. This is the foundation of reciprocity.

Barb is a strong woman who has dedicated her life to helping her community grow and prosper. She stands firm for what she knows is right.

When I asked her where this ability to confront and challenge societal imbalances came from, she said, “I rarely let anything slip past. It’s my love for our own people. My belief in our people, that we are good. I believe that we’re worth something. Like these artists here, I believe they have lots to offer, and they deserve the very best, which is why we created this beautiful showcase for their work.”

Shopping at the ANDPVA Market is one small way we can help support our local Indigenous community. Other ways are to release old harmful ideas and listen to what the community needs and learn how to give back.

Indigenous people believe that the land is their first family. This means renewing our connection to the land and finding ways to give back to it. When I asked Barb how one would do that while living in the city, her response was simple: “While I walk, I pick up garbage.”

We are a long way from righting the wrongs, but the bottom line is that we all must actively participate. Barb’s response was that her community was, “cautiously optimistic” about the shifts in society’s awakening, but the truth is they don’t want to hear how bad you feel about the countless injustices.

“All of the things done to us, the attempted eradication of our culture, social and family structures, languages, spiritual beliefs, theft of our children and on and on… All have been done to get our land and resources. If there are no First Nations people left, there is no one with a claim to the land. No one with the values of respecting the land, living in harmony in a reciprocal relationship with nature,” she said.

Barb’s message is clear. We cannot live in ignorance any longer. We must open our hearts and stand in solidarity with the people who are the original guardians of this land, in every way that we can.