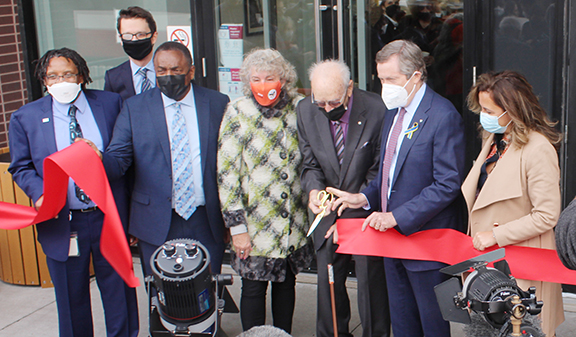 George Shields cuts the ribbon at the official opening ceremony of the affordable housing for seniors building on Gerrard Street East in Leslieville. Inset photos: the exterior of the building which is also home to the Parent Resource EarlyON Child and Family Centre, and George Shields by the cornerstone of the former Riverdale United Church which used to be located on the site. Photos by Alan Shackleton.

WoodGreen Community Services and the City of Toronto celebrated the opening of an affordable housing building for seniors in Leslieville this week.

The building at 1117 Gerrard St. E., just west of Leslie Street, is on the site of the former Riverdale United Church.

The building will now be home to 36 units of affordable housing for seniors and to the Parent Resource EarlyON Child and Family Centre.

A large number of dignitaries, supporters of the project and media turned out for the official opening and ribbon-cutting ceremony on the morning of Tuesday, April 26. Fletcher pointed out that work on transforming the former church site into affordable housing for seniors and a child and family resource centre began at about the same time as the COVID-19 pandemic just over two years ago.

“The whole building was built during the pandemic, and that was not an easy thing to do,” she said in thanking all those who made the facility a reality.

Fletcher said it was the desire of the congregation of the former Riverdale United Church and the United Church of Canada who played a huge role in making sure the site would be used to benefit the community.

“They said they didn’t want the church to just be condos; they wanted to church to continue to play an important social role in the community,” she said.

WoodGreen Community Services is a leader in providing affordable and supportive housing for East Toronto residents, and will operate the housing portion of the building. The parent resource centre had already been established at Riverdale United Church in the past, and it moved over to the nearby Matty Eckler Recreation Centre while the new facility was being built.

George Shields, a longtime member of the Riverdale United Church congregation, was one of the special guests at Tuesday’s ceremony. “It’s just fantastic,” he said of the new facility. “The parents group had been in the church basement before and it was a wonderful thing. We’re so happy to see it being used this way.”

For Shields, who was born in the Riverdale area in 1925, it was extremely important that the church site was used as a community benefit.

“We turned the site over to WoodGreen and I think that was a great decision on the church’s part. We absolutely wanted it to be used to help people.”

“This new development is a testament to what can be accomplished when all orders of government work along with key private partners together to respond to the specific needs of a neighbourhood,” said Tory. “These new affordable homes for seniors will play a big role in the community while at the same time sustaining necessary childcare programming for families.”