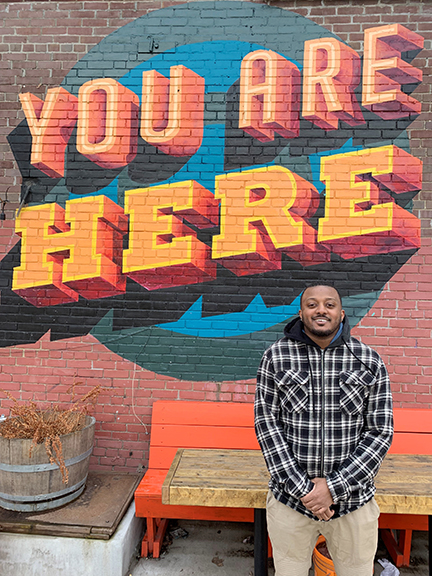 Music has so much power; it can lift our spirts, elicit strong emotions, bring people together, and inspire. It adds texture and vibrancy to our lives. A world without music is a world without dimension and light.

Andrew Afework is a gifted piano teacher who lives and breathes music. “I don’t know where I would be or what I’d be doing without the piano and music,” he said.
Andrew was born, raised and continues to live in our neighbourhood in the Beach Hill area near Gerrard Street East and Coxwell Avenue. He also experienced many teachable moments in his young life.

Born at St. Michael’s Hospital to his Jamaican mother and Ethiopian father, he is the eldest of three children.

“I started playing piano when I was four years old. I was very shy in junior kindergarten, and because I didn’t talk at all and showed no expression, my teacher thought I was deaf. They took me to a facility to investigate. At the end of the test, the doctor told my mom that my hearing was fine. Shortly after, there was a segment at school where the teacher played some music, and that’s when I started smiling and laughing. My teacher suggested to my mom that maybe I should start playing an instrument. My mom asked me if I would be interested in trying piano. That was it, I absolutely loved it,” Andrew told me.

Andrew’s parents embraced their son’s enthusiasm for music and immediately got him a piano. He worked his way up through the Royal Conservatory of Music to Level 7 and then decided to venture away from the institution and focus more on music production.

“I couldn’t get the theory down (at the RCM), which is funny because now I’m stronger at that,” he said.

As he grew older, he developed an interest in composing his own music.

“My friend introduced me to this composer/producer/multi-instrumentalist Ryan Leslie, and after listening to his music it changed my life as far as producing and creating music from scratch,” said Andrew. “I told myself if I’m going to be able to do that, then I really need to shy away from not just reading music but understanding how I can play music by ear. I started focusing on training myself to sit at my piano with no sheet music, I would just sit at the piano and see how long I can play without having to stop. That’s how I got really good at just creating.”

After graduating from Recording Arts Canada (a college for sound and music production), Andrew’s dad wanted to show his support and got him some high-end production equipment. He kept the focus on building his career strong, but needing to make money he took a job at a Loblaws in the dairy department.

Unfortunately, it wasn’t a great experience, he said. “I was the only Black person there and I was doing my best at that job. I could tell they didn’t like me because I was Black. When they fired me, they could only say it was because I wasn’t a ‘good fit.’”

This wasn’t the only time Andrew felt the burden of being a Black person in a white dominant society.

“I went to Gledhill Junior Public School for French but when I was in Grade 2, I had a really bad experience with the teacher. I was the only fully Black kid in my class; many times, I would ask the teacher for help with my work, and she never would. “It traumatized me, so I asked my mom if I could get out of French immersion. I didn’t want to go to this school anymore. So, she took me back to Bowmore Road Public School.”

As a young person Andrew faced both direct and indirect encounters with racism, but when I asked how he felt about it he shared, “When I was a child my parents said, ‘You’ll have to work twice as hard because of the colour of our skin’. And I definitely think that’s true,” Andrew told me with a resentful chuckle.

He then added, “But I’m not really focused on that now. I just try to do my best, be the best version of myself.”

I’ve heard this sentiment from others before and felt the same way myself, but it doesn’t diminish the reality of being unfairly judged because of the colour of one’s skin.

Being ‘the best we can be’ is always rewarding but should never have to come as a consolation prize to being treated as equals.

Andrew’s goal is to one day be a household name musician and producer. He continues to do everything he can, even if it means facing disappointment and rising to the challenge.

“In 2013, I entered a competition called the iStandard Producer Showcase. They only let 30 to 40 applicants into the competition, and I was one of the few selected. I played my beats for them and the one judge, Boy Wonder said, ‘I like the path that you’re taking but the beats sound kinda cheesy’. That crushed my soul because I look up to him. The next guy, Dre McKenzie gave me a little more constructive criticism that I’ve taken to heart and used to find and improve my sound.”

Over the course of a handful of years, Andrew entered this competition about 10 times, each time it cost a few hundred dollars. The value being: Feedback from the top producers in the industry.

In his goal to fine tune his craft he kept going back until he won second place two years in a row, and then eventually in 2018 won first place and the recognition he deserved.

The same year Andrew won the competition he was also accepted by The Remix Project for their Recording Arts Program where he specialized in Production. The Remix Project is an incubator that helps creatives connect and hone their skills in the entertainment industry. They are focused on building community and breaking down barriers for young artists. Out of over 400 applicants and only four slots for Production, Andrew was selected.

Through his dogged efforts Andrew has seen growth and success of his music production, piano gigs, and piano teaching.

“I worked for two years cleaning condos to make money while working on my music, but in 2019 I told myself by 2020 I’m not doing this job. I want to be doing music full time or at least trying to. I took a huge risk. I told my parents I was going to teach piano; I didn’t have any clients, but I had faith I was going to get people, and then I did,” he told me with well-deserved pride.

Over the last few years Andrew has seen his piano teaching client base rise and has had the satisfaction of hearing his music production played on the radio and television.

When I asked about his future, he said, “I definitely want my music to be more international and I want to keep teaching, I really enjoy it. People have told me they like how I teach, and they’ve been able to pick up a lot.”

Andrew concluded his thoughts with this: “Music has the power to inspire and influence, it’s what keeps me going day in and day out.”

I have no doubt Andrew will succeed in his dream of sharing his gift far and wide. He is a thoughtful and ambitious young man who is here to make our world brighter through his music.