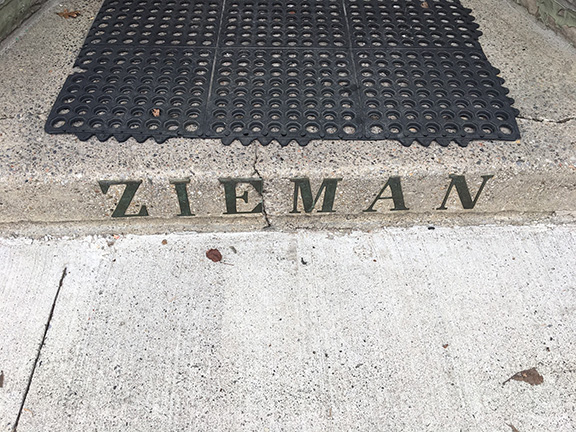 The marker indicating the location of the Zieman clothing store on Main Street still exists. It is now part of the front entrance to the Cool Runnings restaurant at 146 Main St. John Zieman helped organize baseball in the East Toronto area more than 100 years ago.

There have been many articles written by fine sports people about baseball who are far more knowledgeable than I about the game.

But baseball in the East End did not originate down in the Beach!

The original East Toronto baseball teams started up in the present area of Ted Reeve Arena, about 130 or so years ago.

While reading an article in the March 22 edition of Beach Metro Community News, I saw that one of the most prominent and most enthusiastic persons involved in keeping the baseball tradition alive (David Breech) is again getting ready to start the East Toronto Baseball Association season. He’s doing so along with Kevin Ainey and the other good people at the association.

Breech has been involved in local sports for decades and was named Beach Citizen of the Year in 2006.

Now let me be clear, I am not taking anything away from the sluggers down at the diamond in Kew Gardens or the ones in Greenwood Park, or from any other local baseball associations or leagues.

What I am writing about is that 130 or so years ago there were baseball teams playing that were made up of the railroad employees of the Grand Trunk Railroad at Main and Gerrard and residents of the East Toronto area.

Now my column is not about individuals players or specific teams, but there are a couple of people who must be mentioned for tirelessly promoting sports in the community back then.

A man named John Zieman, who lived in the Town of East Toronto, was a merchant with a clothing store on Main Street, just south of Gerrard.

The name Zieman was on the sidewalk step in front of his store (and is still there today on the front step of the Cool Runnings Restaurant at 146 Main St.).

Mr. Zieman took it upon himself to start up sports teams, including a baseball team, with their home base in the Grand Trunk Railyards east of Main Street.
They would play against other teams and Mr. Zieman put his heart and soul into it.

He did not make money from it, but was simply a baseball enthusiast helping his community with sports activities.

David Breech is also an enthusiastic and hard-working supporter of community sports.

If you think it is easy to manage a baseball team or organize a league, think again.

Please remember I am not casting aspersions on any other sports leagues, just stating some facts about the history of baseball in East Toronto.

So baseball has been strong in the East Toronto community since the 1890s with John Zieman and continues to be today with David Breech.

Please feel free to share with me if you have more information on the baseball teams that were part of the Grand Trunk employees and residents of East Toronto in past years.

You can send the information to me care of Beach Metro Community News.

Also, please remember that my next Historic Walking Tour is planned for Saturday, April 23.

It will start at Main Street and Gerrard Street East, the place where baseball originated locally.

The walk begins at 1 p.m., and those planning to take part are asked to meet at the northeast corner of Main Street and Gerrard Street East in front of Ted Reeve Arena.

This Saturday’s walk will focus on the history of the East Toronto area.