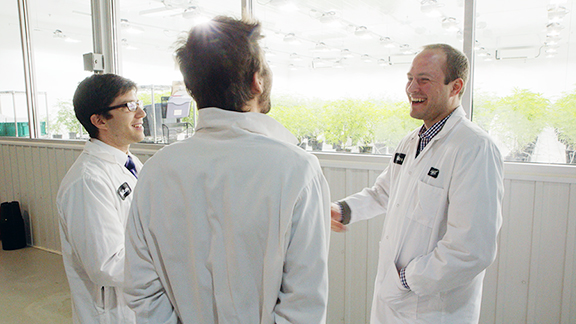 Beaches-East York Liberal MP Nathaniel Erskine-Smith, right, and Sherwood Park-Fort Saskatchewan (Alberta) Conservative MP Garnett Genuis, left, discuss the legalization of cannabis in this scene from their first Political Blind Date in 2017. The two appear in the TVO series' final episode on the night of April 12 in which they discuss solutions to The Opioid Crisis. Photo: TVO.

When it comes to a Political Blind Date, Beaches-East York Liberal MP Nathaniel Erskine-Smith and Sherwood Park-Fort Saskatchewan (Alberta) Conservative MP Garnett Genuis are going back to the beginning.

The pair will have their second Political Blind Date almost five years after they helped launch the television show on TVO which sees politicians of differing views meet to discuss issues of importance.

The show’s format allows the politicians to speak candidly and in settings outside those in which they would more usually debate issues.

The show launched on TVO in November of 2017 with Erskine-Smith and Genuis going on a Political Blind Date to discuss the legalization of cannabis.

Tonight (Tuesday, April 12) the two will appear in the series-ending episode of Political Blind Date as they discuss how best to address Canada’s opioid crisis. Titled The Opioid Crisis, the episode will air at 9 p.m. on TVO.

“Erskine-Smith takes Genuis to speak with experts working on the frontlines to discuss the need to remove the stigma of the criminal charges for drug possession,” said a TVO press release about tonight’s final episode.

“Genuis takes Erskine-Smith to a treatment centre that needs the kind of support Genuis’s Conservative Party is promising, in terms of public funding and new treatment beds. Genuis also orchestrates a meeting for Erskine-Smith with an addiction counsellor with a unique point of view on legalization.”

Tonight’s show is Episode 5 of the final season of Political Blind Date. The series is has ended one “date” short of what had been originally planned for this year due to the cancellation of Episode 4 which was to feature former Unifor president Jerry Dias and Progressive Conservative MPP and Minister of Labour, Training, and Skills Development for Ontario Monte McNaughton.

That episode was titled The Future of Unionism.  “Due to the allegations against Jerry Dias and ongoing investigations, we have decided to pull the episode until more information is forthcoming,” said TVO in a statement.

To read the story by Beach Metro Community News on the very first episode of Political Blind Date back in 2017, please go to https://beachmetro.com/2017/10/31/new-tv-show-pushes-politicians-ditch-talking-points/

Past episodes of Political Blind Date can be screened post broadcast by going to https://www.tvo.org/