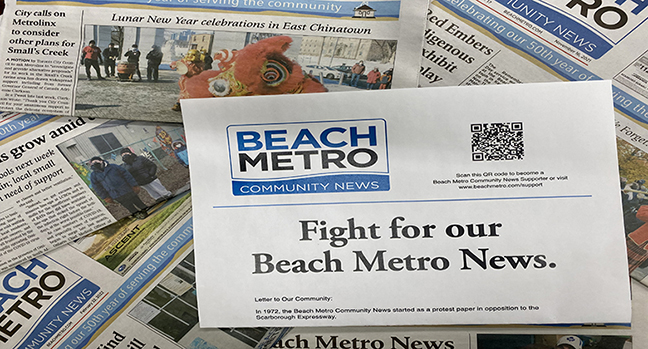 On the occasion of the paper's 50th anniversary, Beach Metro Community News is seeking support from our readers to help us continue covering important local issues such as politics and upcoming elections.

First in today’s column I would like to thank everyone who is supporting Beach Metro Community News in its 50th anniversary fundraising campaign.

The response in the first two weeks has been so wonderful to see.

People have been coming to the counter at the office on Gerrard Steet East to make donations and tell us how much the paper means to them and their families. It is so nice to hear these kinds words and to see your strong financial support as we try to keep this very important non-profit community newspaper going.

Everyone here at Beach Metro Community News appreciates deeply the support and encouragement you are showing towards us.

We want this paper to be around for another 50 years, doing the work it does to keep the community strong and well informed.
Along with coming by to the office you can also support us by making a donation online at www.beachmetro.com/support or through the mail to 2196 Gerrrard St. E., Toronto, ON, M4E 2C7.

Among those offering kind words to us recently was Beaches-East York MPP Rima Berns-McGown who stood up in the Legislature at Queen’s Park to talk about the importance of community newspapers and Beach Metro Community News in particular as she congratulated us on our 50th anniversary.

I was glad to see and hear her speech at Queen’s Park, but disappointed to learn she will not be running in this June’s provincial election.

Berns-McGown will have served as the riding’s NDP MPP for one term. The reasons she outlined for not running for re-election can be seen in this story: https://beachmetro.com/2022/03/22/toxic-state-of-politics-among-reasons-beaches-east-york-mpp-rima-berns-mcgown-will-not-be-running-for-second-term/

They are valid and understandable, but also extremely concerning given the amount of abuse she had been subjected to through social media and other channels. Politics has always been a rough-and-tumble affair, but there used to be lines it would have been unthinkable to cross. Not anymore.

As anyone who spends time on social media knows, we’re now in a world where there are no limits on behaviour and what people feel they have a “right” to say. Politics in this country has become so much more sinister, stupider, disgusting and dangerous. Unfortunately, I don’t think we can turn the clock back to a gentler and more polite time.

What we can do, though, is think long and hard about the people we elect to represent us.

This year sees both a provincial election (June 2) and a municipal election (Oct. 24). Voters, this is your chance to make sure good people are elected. Look for those who speak to working together for all residents and promote tolerance and cooperation as opposed to division and distrust.

This is not the column for me to talk about specific candidates, parties, and riding/ward races as we head into these two elections. However, in coming editions I am looking forward to ramping up our provincial election coverage.

We will especially be digging into the province’s role in Metrolinx’s treatment of East Toronto, and how do we build more affordable housing while protecting established neighbourhoods.