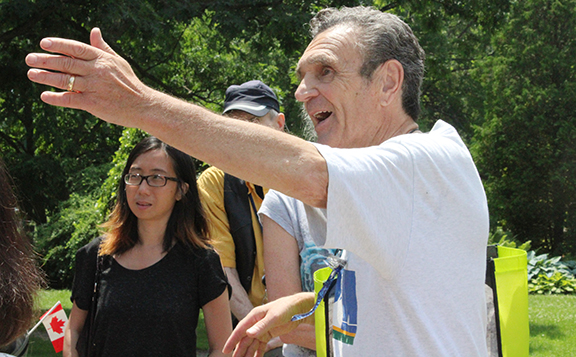 Gene Domagala leads one of his historic walks through the community in this Beach Metro Community News file photo.

The Beach Metro Community News (which published its first edition on March 1, 1972 as Ward 9 Community News) is celebrating its 50th anniversary. In my humble opinion, each of these 50 years have been a reflection of great historic and journalistic prose.

This is what we mean by Freedom of the Press. It is the opportunity (and right) for people to express their own opinions regardless of the consequences. This is the mandate of the great local community newspaper that we have here.

Beach Metro is a community newspaper, which means people, events, places, happenings, etc… are reported in it.

One of the paper’s great services is its Community Calendar. People read this to get their information about what’s happening and where and when festivals and other events are taking place. The Community Calendar lets readers know about all kinds of local events including meetings, historic walks, religious services and so much more.

Beach Metro also features advertising for all kinds of different services and trades. You name it, Beach Metro prints it.

But the thing that makes a newspaper like Beach Metro extra special is the people, and the people in this community are the best.

This paper is a backbone of the community. The people here are involved in all aspects of the paper. And vitally important are the many volunteers who deliver the Beach Metro.

I have been involved with Ward 9 Community News/Beach Metro Community News for pretty much the entire 50 years it has existed. I guess you could say I am biased because of my association with it, but I think it is the best community newspaper there is.

There have been at least a dozen or so papers in the community over the years. Some stayed around for many years, while others folded – some slowly but always surely.

I have been involved with most of those “papers” in one way or another – mostly by writing about history – but Beach Metro is the one I have been writing in for some 40 years.

In that time, I have gotten to know most of the people who have been involved in the paper over the years.

So where and why did this newspaper start?

More than 50 years ago there was a movement of local people to stop the Scarborough Expressway which would have encroached on the Beach area. The people had no way to express their views on this other than talking directly to politicians.

So, a few dozen people met and made plans for a community newspaper so their voices could be heard and more people made aware of what was going on.

Ward 9 Community News was originally located in the old Y.M.C.A. building on Kingston Road, where it remained for many years.

It is hard to list the names of all the people who came together to start the paper more than 50 years ago and so many of them were volunteers. Please bear with me now, though, as I do mention some of the people I know and remember. Forgive me if I have missed anyone or spelled a name wrong.

In the beginning years of the paper those who helped included Doug White, Bud Jorgenson, Jerry Thompson, Don Peace, Ron Popa, Tom Brooks, Norm Browne, Betty Stephens, Roy Merrens, Ian Grinnell, Helen Hicks, Peggy Walsh and Pat Kelly. They were some of the originals and worked their butts off to start this great newspaper. To them we owe a great debt of gratitude which I think is much overdue.

This is certainly not to say there are not others who we should also be grateful to for this newspaper and how it was started. There absolutely are.

I will now try and tell some of my personal experiences with the paper and some of the people involved with it.

But first, let me be blunt and say that without the volunteers the paper would have folded due to financial and other challenges.

But where would this paper be without its longtime editor Joan Latimer who was there for the first 22 years? She is one of the most respected people in the Beach.

Another key person is Sheila Blinoff, longtime general manager, who is still associated with the paper as a member of the volunteer board of directors. Sheila, we simply could not have this paper without you.

There are so many others over the years who have been important to the paper. People such as Carole Stimmell, Jon Muldoon, Bill Suddick, David Van Dyke, Bill MacLean, Melinda Drake, Carolin Schmidt, Hope Armstrong, Phil Lameira, Dianne Marquardt, Anna Killen, Jan Main, Ann Brokelman, Bernie Fletcher, Glenn Cochrane, Edward Finstein, Thomas Neal, Paul Babich, Steven Chadwick, Eric Slater, Mary Fran McQuade, Mimi Liliefeldt, Allan Katchky, Debbie Visconti and so many more including the present staff and volunteer board of directors. Again my apologies if I missed someone or spelled their name wrong. There are just so many people over the 50 years that it is impossible to mention them all.

Beach Metro News has always been so supportive of the work done by groups that are trying to help others in the community. Support for organizations such as Neighbourhood Link/Senior Link and Community Centre 55 has been vital.

The paper also covers our politicians and police, letting people know what they are doing and questioning them on the issues. Many local neighbourhood associations and other groups were able to get started thanks to stories and ads in Beach Metro.

It’s been a privilege and an honour for me to have been part of this newspaper for so many years.