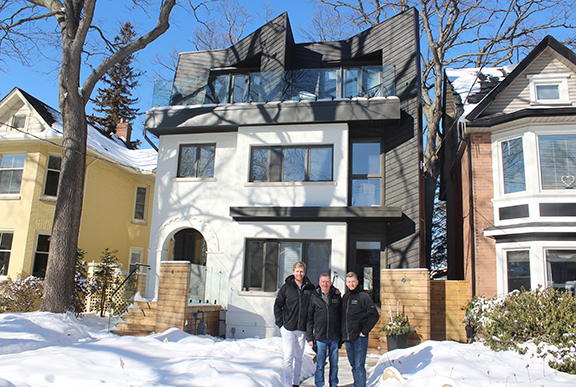 Architect Craig Race, left, with his father Phil and brother Steve, in front of what is now a two-unit house at 12 Swanwick Ave. Inset photo shows the backyard of the unit on the west side.

When architect Craig Race first proposed splitting a single-family home on Swanwick Avenue into two residential units, some of the neighbours were concerned, some were afraid and pretty much none of them were happy.

In the two years since, Race was able to get the plan through the city approvals process and he is now living in one-half of the converted house, which he and his family own, and renting the other.

Race said the process has been a long one, but worth it in the end as he feels he is contributing to the City of Toronto’s “missing middle” housing stock.

“The big concern was people thought we were putting an apartment building here,” he told Beach Metro Community News in an interview earlier this month at the house at 12 Swanwick Ave., southwest of Main Street and Gerrard Street East.

Part of that was reflected in neighbours’ concerns aired in January of 2020 when they cited the number of entrances on the plan for the house as indicating it would contain more than two units.

Also of concern to residents already living in the area was available parking in the neighbourhood for two units, and the preservation of trees on the lot.

Race said he worked with neighbours on the plans for the house, which included raising the roof and additions on the back and side to increase space, to address their concerns. He said there is two-parking for each unit that is accessed from the rear laneway.

An adjustment to the addition on the northeast side of the house was also made in order to save a large oak tree on that side of the property, said Race.

He also worked hard to preserve the character of the house which was built early in the 1900s.

“Our neighbourhood has all kinds of housing in pockets….It’s important to maintain heritage feel and character of streets,” said Race.  “We are a family and we hold those values too.”

Most neighbours  are pleased with how it has all turned out, he said.

“A lot of the neighbours are just happy to see we have a house. It’s been a long process and COVID did not make it any easier. We’re all relieved to be able to have a house we can live in,” said Race.

“People have been coming by and they say it looks good.”

Since the lot has been severed, each unit can be sold or rented on its own. At the moment, Race and his family own both units which feature four bedrooms, plus a den and three bathrooms.

A family has rented the other unit and will be moving in in March, said Race.

Increasing the types and affordability of housing available in Toronto is what the term “missing middle” means and includes different types of multi-unit builds, laneway suites, and conversions of single-family homes or the lots that single-family homes sit on into multiple, often smaller housing units.

Many single-family home neighbourhoods are losing population due to high prices and the lack of different and more affordable housing options, he said.

The “way of the future” is to get more for less from properties, including converting single-family homes to semi-detached.

He added that the neigbhourhood along Gerrard Street East west of Main Street has a wide variety of housing, and though it may have been a shock to see single-family home converted for some residents, it does fit in with the area.

“There are broad and differing types of housing in this neighbourhood and some of the properties are apartments and multi-units and some are single-family houses,” said Race.

The long process he had to go through with 12 Swanwick is reflective of the City of Toronto’s bylaws and Committee of Adjustment system which favour single-family home neighbourhoods and should be modernized for changing needs, he said.

“All established neighbourhoods go through this, but our Toronto bylaws are not very friendly to modern housing,” said Race. “Variances (for building bylaws) are pretty much always needed on paper, but they were designed for the housing of 50 years ago.”