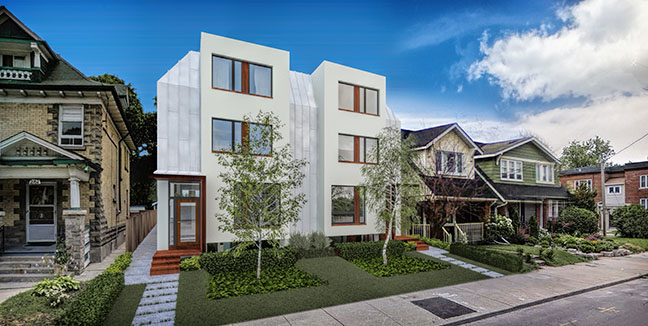 Image above shows an artist's conception of the plan by P & R Developments Inc. for 2165 Gerrard St. E., just west of Main Street. Inset photo shows the single-family house now on the lot.

A recent ruling by the Toronto Local Appeal Body (TLAB) has cleared the way for a contentious plan to significantly increase density on a large single-family home lot in the Gerrard Street East and Main Street area.

The decision was released earlier this month by TLAB after the developer proposing the build had appealed a decision by the City of Toronto’s Committee of Adjustment (CoA) in December of 2020 that did not permit the severance of the property at 2165 Gerrard St. E. into two building lots.

P & R Developments Inc. appealed that decision in June of this year, and TLAB’s ruling overturning the CoA’s denial of the lot severance was made public on Nov. 3.

With the lot severance now approved by TLAB, P & R said it plans to move soon on demolishing the house now on the lot and replacing it with a semidetached three-storey fourplex residential building and two laneway suites. The new development will result in 10 residential units on the lot on the south side of Gerrard Street East between Main Street and Norwood Avenue.

“Naturally we are overjoyed now that we are able to build,” said Rolf Paloheimo of P & R Developments Inc. in an email to Beach Metro Community News.

He said the proposal was always compliant with City of Toronto bylaws, which was why the company was surprised it was rejected by the CoA last year and why they appealed that decision to TLAB. “We designed the project to be 100 per cent compliant with city bylaws (‘as of right’) and were surprised when we were turned down for our severance.”

In its ruling, TLAB said the development proposal conforms to City of Toronto Official Plan (OP) and its objectives.

“This application represents change. The demolition of the existing dwelling will represent a shift in the style of building on the Subject Property, and the proposed density is high,” wrote TLAB’s Panel Chair Christine Kilby in the ruling.

This development proposal has been strongly objected to by neighbours in the community since it first surfaced very early in 2020. Speaking at the TLAB hearing in June and presenting their objections to the development were local residents Victor Lam and Mark Postill. They said it would have an extremely negative impact on the character of the neighbourhood, and especially those living closest to it. Of most concern was the increase in density on the lot, the size of the buildings, the safety impact on the back lane with the laneway suites, and that the development would contribute to parking congestion in the area as the proposal does not include any dedicated parking spaces.

While those concerns were heard and taken into consideration by the TLAB, they were ultimately ruled to be not severe enough to deny the bid to sever the lot and build the proposed development at 2165 Gerrard St. E.

“The Applicant claims that the proposed development will increase density while respecting the need for Neighbourhoods to remain stable and preserve their character,” wrote Kilby. “What makes this Application slightly more complex than a traditional consent to sever application is the degree to which the density of the intended use of the severed property differs from its current use. This shift in density on the Subject Property must be considered in light of the Subject Property’s location in a well-established, well-serviced neighbourhood that contains numerous multi-unit dwellings, as well as land use planning policies highlighting intensification as a goal… I find that the Application satisfies the applicable statutory requirements for approval.”

Paloheimo told Beach Metro Community News that he wanted to reassure residents in the area that ultimately this development will be a benefit to the community.

“We believe that our project will be a positive addition to the neighbourhood, and hope that all our neighbours appreciate that as well,” he said.

“We have had three public meetings seeking feedback from our neighbours and the city. In response to feedback received we have altered the design, most recently eliminating side entrances, and stepping the rear balconies back. We are now focussed on making sure the end product is beautiful and durable. We intend to build sustainable beautiful homes that you will be proud to have in the neighbourhood.”

Paloheimo said P & R is in the process of applying for a building permit. “We are optimistic we can start demolition and construction soon.”

Beaches-East York Councillor Brad Bradford has been keeping an eye on this proposal since the start, and said it was important that the developer listened to community concerns regarding the design of the buildings and the preservation of a large oak tree at the back of the lot.

“In the midst of a housing crisis, we have to be able to build reasonable housing options in places like these without negatively impacting the communities nearby,” he said.

Bradford said there is a balancing act that must be realized when it comes to increasing available density in established neighbourhoods in the city.

“Change in a growing city is inevitable and it’s important to strike the right balance,” he said. “In this case, the TLAB felt the plan meets all of the planning tests that are in place for good reasons. Stopping all growth simply isn’t an option if we want to keep our communities, businesses and livelihoods to stay intact. People need affordable places to live. We also can’t accept any kind of growth without restraint or consideration.”

For earlier stories on the proposal for 2165 Gerrard St. E., please see the following: