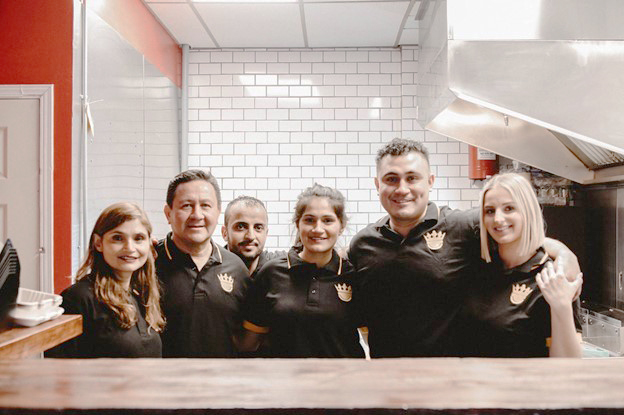 Since last summer, the storefront at 281 Scarborough Rd. in the Kingston Road Village has teased locals to a new, delicious business on the way.

Richard Porras, the owner of Real Empanada, is confident that east-enders will fall in love with his authentic, yet unique recipes that he said can’t be found anywhere else in Toronto.

But even with confidence that his food will be a hit, Porras was excited to launch his opening with free samples to share his food with the community and potentially providing people with an exciting new food experience they’ve never had.

“I know sometimes people can be hesitant to try new foods or try new things, especially when you have to pay for it,” said Porras. “So, I want people to know they can come in and try our empanadas and tacos on Saturday, because I know they’re going to love them.”

Porras grew up working in the kitchen of his parents’ restaurant, Motivos, in the west-end until they sold the business in 2012. Since he was 13 years old, Porras has been ‘the empanada guy’ after creating a fusion blend of their most popular empanadas.

Even after the closure of the family restaurant, the requests for Porras’s signature empanadas didn’t stop and the family continued catering for events.

In 2017 Porras decided to leave his corporate life and follow his passion for cooking, introducing the Real Empanada brand to farmer’s markets and then opening his first brick and mortar in 2019 at 825 Dundas St. W.

“When I was working on Bay Street, I kept feeling unsatisfied, unfulfilled,” said Porras. “I grew up cooking, but it took me some time to figure out that it was really my passion. Empanadas had been hiding in plain sight all this time, so I just went for it.”

Empanadas and tacos are available in beef, chicken, vegetarian, and vegan options. (The tacos are only available on weekends.) Every order includes a complimentary side of Mama’s Signature Salsa, Porras’s mother’s secret recipe that comes in four heat levels from mild to fuego.

“I’m super excited to get feedback from our new customers,” said Porras. “Especially on our expanded menu. I’m just hoping it’s a big hit with the community.”

Real Empanada will also be providing a lunch special to local students, offering three empanadas and a drink for $10.

To learn more about the Real Empanada story or view a menu visit https://realempanada.com/ or follow them on Instagram at @realempanadaco