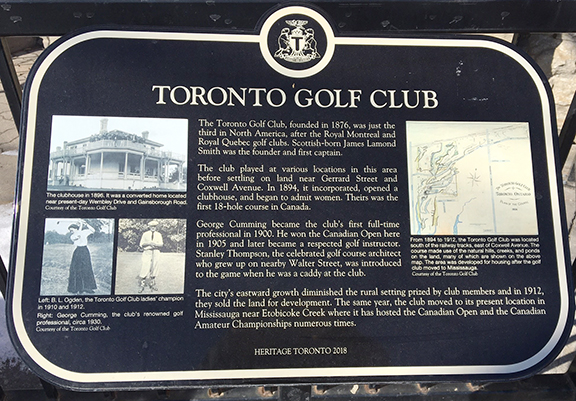 This plaque on Kingston Road at Queen Street East pays tribute to the Toronto Golf Club which was founded in the area in 1876.

One of the great things Beach Metro Community News/Ward 9 Community News has done in its 50-year history is the watchword of all newspapers – Freedom of The Press.

In Beach Metro Community News, they have given people of all types of abilities the chance to present their views on all matters.

On this particular issue, I will mention the sport of golf.

There have been many articles written about golf by various people in our local paper in the past 50 years.

I was one person who is and still am interested in history. I was doing one of my first historical tours about 45 or 46 years ago in the Gerrard/Woodbine/Coxwell area, and I had noted in my research that this area had the first golf club in Ontario.

In the area bounded by Coxwell on the west, St. John’s Norway on the south, the railroad line on the north and Golfview Avenue (just east of Woodbine Avenue) on the east, this golf club was the third one to be founded in North America and it was called the Toronto Golf Club which was established in 1876. The other two golf clubs in North America at the time were the Royal Montreal (founded in 1873) and the Royal Quebec Golf Club (founded in 1875).

It stayed in the area where it was first built for about 35 or 36 years. The club later moved west to the Etobicoke-Mississauga border by Etobicoke Creek where it is still located.

While I was doing my historic walk in the old Toronto Golf Club area, I thought it would be a good idea to put a historic plaque showing where the club had originated.

However, my attempts back then were in vain for a plaque to be placed there. In the last few years, however, some historic like-minded citizens did get a plaque put up in the Toronto Golf Club’s honour at the corner of Queen Street East and Kingston Road, in front of Murphy’s Law.

But dear readers and avid duffers, that club was not the first for the introduction of golf in its various forms locally for the last 100 years or so.

The first, or one of the first, attempts at a municipal golf course for the ordinary golfers was proposed right here in the Beach area.

It was successful and it was called the Glen Stewart Golf Course. Now it was already in existence as a private course on the grounds of a wealthy land owner in the Beach by the name of A. E. Ames who was at one time president of the Toronto Stock Exchange.

A. E. Ames was an enthusiastic outdoorsman and recreationist who besides having his own private golf course also allowed his properties to be used for races other different sporting events.

The Glen Stewart Golf Course was in existence for several years and was a great inspiration for many other municipal golf course. The Glen Stewart course was bounded by Lee Avenue on the west, Glen Stewart Ravine on the east, Kingston Road on the north, and Williamson Road on the south.
The course had several hundred members on its roster and helped many a person play the game of golf.

Like all good things it had to come to an end, but its legacy lives on in other golf courses in the area by people who still live in the community and even some trophies that have been mentioned in different issues of this newspaper.

You must realize dear readers and golfers, you wouldn’t know about historic sports events such as golf courses if it weren’t for the Beach Metro Community News and its 50 years of serving the community.

Even though other articles have been written on golf, it came to my attention through Beach Metro Community News’ last edition (Jan. 25), that they were thinking of altering the municipal golf course at Dentonia Park. Which made me think, let’s tell the readers again where this grand old game of golf began in Ontario – in the Beach.

The idea also came to me about golf when I was walking down the street and noticed my neighbours who were shouldering their golf clubs on the way out to a range and I spoke to them. Even though it was snowing, they were out to practice their game.

There will be more on the local history of this and other great games in future editions of Beach Memories.