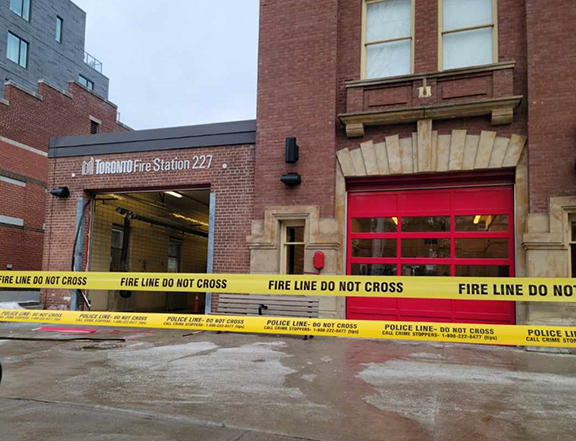 A 28-year-old woman has been arrested after a fire truck was stolen from inside the Beach fire station on Queen Street East near Woodbine Avenue early this morning.

According to police, a person broke into Toronto Fire Station 227 at approximately 4:45 a.m. on Thursday, Feb. 10.

The fire truck was then driven out of the station, smashing through the front garage bay doors. A section of the bay door was still on Queen Street East earlier this morning as police and fire officials had the area taped off for investigation. Police quickly located the fire truck and followed it in a “low-speed pursuit” which ended on Unwin Avenue in the Port Lands, according to CP24.

Police said charges are pending against the 28-year-old woman.

A Toronto Fire Services media spokesperson told Beach Metro Community News this morning that he was unable to comment on the incident at this time as it was an active police investigation.