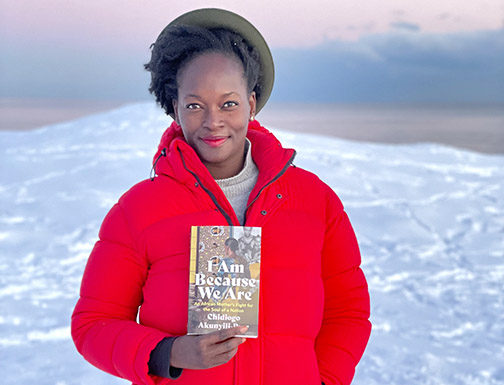 Beach author Chidiogo Akunyili-Parr will speak about her book I am Because We Are: An African Mother’s Fight for the Soul of a Nation, on Feb. 16 as part of the Toronto Public Library’s Black History Month celebrations in February. Photo: Submitted.

Local author Chidiogo Akunyili-Parr’s new book, I am Because We are: An African Mother’s Fight for the Soul of a Nation, tells the story of her mother Dora’s inspirational rise to director-general of National Agency for Food and Drug Administration and Control (NAFDAC) of Nigeria.

The book also chronicles Dora Akunyili’s battles against corruption and misogyny, and the impact her career had on her family, Nigeria, and the rest of the world.

Born and raised in Nigeria, Akunyili-Parr speaks Nigerian, French, English, German, Chinese, Spanish and Italian.
“I’ve lived in the Beach for about four years now,” said Akunyili-Parr. “My journey has been very much a global one. Seeking out a part of me and with it, I think, this theme that I’m very drawn to of Ubuntu and shared humanity.”

Ubuntu has its roots in most Bantu languages and it speaks to the idea that we are who we are because of the people around us. Ubuntu stresses the interconnectedness between all beings as well as living in harmony with the world around us. “There’s a reminder of a shared humanity,” said Akunyili-Parr. “A person is a person to other people. I am because you are, I am because we are and so it goes.”

Akunyili-Parr feels that connection in the stories we tell each other.

“I’ve been coming across this clarity on how stories help us to understand each other,” said Akunyili-Parr.

“Why? Because we are two other people, right? Stories are powerful ways of showing us interconnectedness. We see ourselves very quickly in other people’s stories, right? It’s very rare that there’s a story where you can’t find a piece of you and because that’s kind of the magic of we’re all connected.”

I am Because We are: An African Mother’s Fight for the Soul of a Nation was released in January of this year. It is an intimate memoir of Dora Akunyili’s life and career, as written by her daughter.

“In truth, the book came to me,” said Akunyili-Parr. “I was living in Geneva at the time and I was at a stage in my life where I was very devoted to connecting to what was coming through me.”

Dora Akunyili was born in Nigeria in 1951 in southeast Nigeria to the Igbo ethnic group. A gifted and dedicated student, she was awarded the Eastern Nigerian Government Post Primary Scholarship and the Federal Government of Nigeria Undergraduate Scholarship. She studied pharmacology at the University of Nigeria and eventually received her PhD in ethnopharmacology in 1985.

The fight against counterfeit imports, especially food and drugs, was personal for Akunyili after the death of her sister due to fake insulin according to Akunyili-Parr.

Counterfeiting was so prevalent in Nigeria at the time that it was difficult to distinguish real products from fake.

“Anything from baby formula, to malaria pills, to antibiotics and even things like syringes,” said Akunyili-Parr.

Akunyili was highly educated and qualified, but it was her honesty that landed her on the radar of Olusegun Obasanjo, President of Nigeria at the time.

He was searching for someone trustworthy to run NAFDAC when he was told of a woman who returned the majority of the goods given to her for a medical procedure. It was then that Dr. Dora Akunyili received a call from the President.

“And that’s how she went from sort of like a small fish in a pond to a huge pond that was the rest of Nigeria, managing and directing all drugs in all of the country,” said Akunyili-Parr.

Dr. Dora Akunyili’s influence was immediate, resulting in a reduction of close to 80 per cent of fake drugs according to Akunyili-Parr.

“And the impact she had was unprecedented,” said Akunyili-Parr. “Nigerians were shocked that someone would work so hard on their behalf. They were shocked that that person was as honest as she was because there’s a lot of opportunity to be bribed by someone who needs their product to come in who will give you a lot of money or a big cut for that to happen.”

Akunyili was dedicated to her work. With dedication comes sacrifice, and one of the things she had to sacrifice was time spent with her husband and six children.

“She’s stopped being our mother and became this mother to a nation,” said Akunyili-Parr. “She’s called ‘mommy,‘ which is a term of endearment in Nigeria, by so many, until today. People mourn her like she was someone they knew, even though they’ve never met her. That is an experience for a child, to ‘leave their mother to a bigger cause.’”

In a patriarchal society, Akunyili’s husband, the late Dr. Chike Akunyili, was unique in that he didn’t mind standing behind and supporting his wife, said Akunyili-Parr.

“It’s so incredible, because it might sound strange, but there are many, many, many, many men who would have resented her power, her fame and her impact,” she said. “It’s something that so many men struggle with. But my father, for all his faults as a human, the greatest gift he could give my mother was to not just let her fly, but to hold her up.”

Channelling the teachings and strength of her father and grandmother before her, as well as her difficult childhood that included a civil war and being separated from her family, Akunyili was able to accomplish so much and leave behind a rich legacy.

“My mother was a ‘nobody’,” said Akunyili-Parr. “And I think that’s a powerful story. The book walks you through how she was just a regular person, and her ‘rise to fame’.”

To learn more about Akunyili-Parr and I am Because We Are: An African Mother’s Fight for the Soul of a Nation, you can tune into the Toronto Public Library’s online Black History Month Series on Feb. 16, from 7 to 8 p.m.
To register for Akunyili-Parr’s presentation, please visit www.crowdcast.io/e/tplchidiogo/register
Her presentation is among a number of online events planned by the Toronto Public Library to celebrate Black History Month this February.

• Wednesday, Feb. 23 – Broadcaster and storyteller Ugonma Ekeanyanwu presents African Stories by Moonlight. Ekeanyanwu will share adaptations of African traditional stories passed down orally from 2 to 2:30 p.m. To register, go to www.crowdcast.io/e/africanstoriesmoonlight/register.
Also on Feb. 23, there will be a panel on the connection between racial and environmental justice titled The Water is Troubled: Blackness in the Environmental Movement moderated by Demeisha Dennis and Judy Milay from 6 to 8:30 p.m. Guests include author Audrey Peterman, Chúk Odenigbo, Dr. Ingrid Waldron, and Dr. Paula Kahumbu. To register, go to www.crowdcast.io/e/tpl-blackness-in-the-environmental-movement/register.
Also on Feb. 23, host Wan will be joined by Dan Charnas to discuss his book Dilla Time which delves into the life, career, and posthumous influence on hip-hop of James DeWitt Yancey aka J Dilla from 7 to 8 p.m. To register, go to www.crowdcast.io/e/tpl_dillatime/register.

• Friday, Feb. 25 – Habiba Cooper Diallo discusses her high school journal, #BlackinSchool, which documents her struggles against stereotypes, microaggressions, as well as systemic and outright racism among other issues she faced as a Black student in Canada. The presentation is from noon to 1 p.m. To register, go to www.crowdcast.io/e/tpl_blackinschool/register