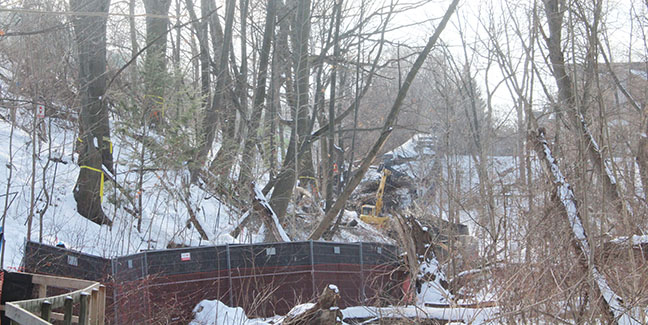 Heavy equipment can be seen in Small's Creek Ravine, on the north side of the railroad tracks southwest of Merrill Bridge Road Park on Monday, Feb. 7. Photo by Alan Shackleton.

A motion by Toronto City Council to ask Metrolinx to “investigate and provide alternative proposals” for its work in the Small’s Creek ravine area has drawn widespread support including from former Governor General of Canada Adrienne Clarkson.

In a Tweet late last week, Clarkson wrote: “Thank you City Council for your unanimous support to protect the delicate ecosystem of Small’s Creek. A restoration plan needs to be in place to preserve this hidden gem, one of nature’s beautiful resources in our city!”

Council’s motion on Feb. 2 directs the city’s Executive Director, Transportation Expansion Office, to request Metrolinx to investigate and provide alternate proposals for its work “that reduce the impact to the ravine ecosystem due to Small’s Creek project, including the approach for how the pedestrian connection from Merrill Bridge Road Park to Williamson Park Ravine will be included in the scope of the project.”

Work by Metrolinx has already begun in the ravine between the railroad tracks and Merrill Bridge Road Park, which is south west of Woodbine and Danforth avenues.

On  Monday, Feb. 7, heavy equipment was working in the area removing trees.

Work in the area is being done as part of Metrolinx’s expansion of the Lakeshore East Rail Corridor from three tracks to four. This work will include the removal of a number of trees and the installation of a concrete retaining wall on the north side of the tracks.

Last week’s Council motion was led by Toronto-Danforth Councillor Paula Fletcher and Beaches-East York Councillor Brad Bradford. Along with the request for Metrolinx to consider alternate proposals for the Small’s Creek work, the motion also asks for detailed city reports on the impacts of Metrolinx’s proposal for a train layover facility in the Don Valley. The motion also calls for public consultation with the community by Metrolinx regarding its plans to run the Ontario Line above ground through East Toronto.

Mitch Robertson, with Friends of Small’s Creek, said his group met with Metrolinx representatives on the morning of Feb. 3 regarding concerns about the start of work in the ravine.

“We were given an opportunity to meet with Phil Verster, the CEO at Metrolinx, through the combined efforts of our city councillor, Brad Bradford and our (Beaches-East York) MPP Rima Berns-McGown,” said Robertson.

“We understood it would be an opportunity to make our case as to how we can still successfully add the fourth rail, which we support, but with tweaks to the construction method to avoid the total clear cutting of trees on the embankment, north of the tracks which will have severe consequences to the wetland.”

Robertson said during the meeting his group was made aware that work had already started in the area being discussed.

“The Metrolinx position seems to be that they have heard us, considered our ideas but are moving forward with their original plans unaltered on the Small’s Creek side of the tracks,” he said. “They are proceeding as planned, ‘imminently.’ This in spite of the successful motion passed at City Council (24-0) asking for a pause.”

Below is the full text of the letter, which is dated Jan. 31:

“Metrolinx recognizes the Small’s Creek ravine as a special place, and respects its environmental significance to the community. With this in mind, we have taken several actions in response to community engagement. By delaying work, reassessing our plans, meeting with neighbours and committing to a robust restoration plan. The GO Expansion program is moving forward to create an integrated, convenient and greener transit system, that helps Toronto and Ontario grow sustainably, while also minimizing the impacts to the ravine.
Outlined below are the actions we have taken as a result of our conversations with the community, to ensure Small’s Creek remains a special place in the community.
• We have delayed the construction for further community discussion and for Hatch, an independent third party technical advisor, to complete a review of key alternative construction proposals.
• We saved 60 trees by changing the construction laydown area and access path to the corridor
• Our robust restoration plan will plant 2000 trees with many planted throughout the ravine
• The GO Expansion program underwent an independent voluntary review by the Toronto and Region Conservation Authority (TRCA) on construction mitigation and restoration methods
• Our Small’s Creek restoration plan includes a restored pedestrian connection along the ravine
• Met regularly with the community to engage and inform

Community members have asked Metrolinx to consider a different construction approach of the widening of the rail embankment to support the fourth track and electrification infrastructure. We reviewed the community’s proposals and it is evident that the original approach continues to have the least impact on the ravine.
One of the alternative approaches considered a buried bridge where the fourth track would be supported by buried pylons or piers. This approach would require a large access platform to be built through Merril Bridge Road Park. This would lead to more trees being cut down for the enlarged access, laydown and construction area.
The approach recommended by our engineering consultants is known as “t-wall construction,” which use concrete panels that we can construct off site, and allows us to minimize our construction footprint and create space for replanting, once construction is complete. The ravine land at the bottom of the wall will be restored and replanted with the new slope having native grasses and shrubs.
During the planning stages of any Metrolinx’s project, we explore multiple options with a focus on creating infrastructure for the safe operation of trains and the protection of transit riders, neighbours and ravine users.

A review of the construction laydown area near Small’s Creek has reduced its footprint, saving 60 trees along the ravine, including several large red oaks. We are working closely with our partners at the City of Toronto and the Toronto and Region Conservation Authority (TRCA), to refine our restoration plan to significantly increase tree and vegetation planting to the most impacted areas.
The restoration plan for the ravine will return the ecosystem to its native vegetation, creating important habitat areas for wildlife. Our plan includes the planting of 2000 trees, exceeding the City of Toronto’s own compensation ratios and the planting of shrubs on the rail embankment to increase shade cover and habitat. We appreciate the community’s feedback and suggestions, and these additions are a direct result of your feedback.

Community members have asked Metrolinx to construct a pedestrian walkway through the culvert connecting Merrill Bridge Park and Williamson Ravine. This new walkway would result in the removal of additional trees and would not benefit the ecological health of the ravine. Such a walkway is not required for the purposes of this GO expansion project, nor does it enhance the ecological criteria for this project. In preservation of the ravine’s ecological restoration, Metrolinx would prefer to not remove trees beyond what is required for construction.

Metrolinx will re-establish a walking path in the ravine. This was in response to the specific request by the local community. There will be opportunities for the community’s involvement in determining the best options for this new path. We continue to explore options with the City of Toronto and are determining the necessary regulatory approval from the TRCA with respect to crossing the creek and working within the designated Environmental Sensitive Area.
We very much appreciate that all community members shared their ideas and concerns with us. Community input is an important part of shaping our projects, and this community’s engagement through monthly construction meetings, site walks and town halls has made a positive difference in our work.
By responding to community concerns, we have been able to reduce the scale of vegetation removal, and have committed further restoration efforts with the planting of additional trees and vegetation to support the ecological function and importance of the Small’s Creek ravine in the public realm.
As we work to advance GO Expansion, we will seek to protect the ravine as we deliver the transit that is critical to serving the population of Toronto and surrounding region.”

The sad thing is, once a tree is cut down, it is gone. No piece of paper, or protest can save it. Developers (and of course Metrolinx know this). So they hasten the slaughter and rarely, if ever, get any punishment.