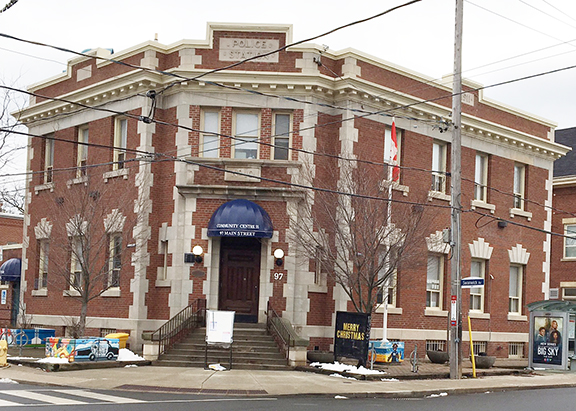 Fifty years ago the building that now houses Community Centre 55 was the Metropolitan Toronto Police Force's station for 55 Division. The next year, 1973, police moved to the new 55 Division station at Dundas and Coxwell. Inset photo shows the front page of the first edition of Ward 9 Community News (now known as Beach Metro Community News) in March of 1972.

Toronto in 1972 was different than it is today.

Our electoral boundaries federally, provincially and municipally here in the Beach and other parts of Toronto have undergone a number of changes in the last 50 years.

Federally our area was known as Greenwood in 1972 and our Member of Parliament was Andrew Brewin of the NDP who had the seat from 1962 to 1979.

Provincially in 1972 we were the riding of Beaches-Woodbine.

Our Member of Provincial Parliament from 1967 to 1971 was John L. Brown of the NDP. From 1971 to 1975, the riding’s MPP was Progressive Conservative Thomas Wardle Sr.

Also in 1972, our specific city electoral area was known as Ward 9 (The Beaches) and it had two aldermen on the City of Toronto Council.

They were Reid Scott and Thomas Wardle Sr. (who was later elected MPP) and then Dorothy Thomas elected in the 1972 city election.

Fifty years ago, the City of Toronto had a population of 680,000 and was part of Metropolitan Toronto which included the municipalities of East York, Scarborough, North York, Etobicoke and York.

Back then there was a City of Toronto Council and a Metro Council.

In 1997, Metro Toronto’s six municipalities were merged into the megacity to become one City of Toronto (as we now know it) served by one municipal council.

Fifty years ago the municipalities that made up Metro Toronto all had their own public school boards and fire departments as well.

Aside from the political structure, the Beach was home to Toronto parks and recreation commissioner Ivan Forrest.

There is a park named after him at Queen Street East at Glen Manor Drive called Ivan Forrest Gardens.

The Toronto fire chief in 1972 was Beach resident Charles Chambers.

Fifty years ago our police station was located on Main Street, south of Gerrard Street East, in the building that is now home to Community Centre 55.

The 55 Division police station opened at Coxwell Avenue and Dundas Street East in 1973. Also in 1972, a special honour was given to the great Canadian pianist Oscar Peterson who was named to the Order of Canada.

And also in 1972, Ward 9 Community News started publishing in March. Now known as Beach Metro Community News (the name was changed in 1988), this year marks the paper’s 50th anniversary. More to come on that later.