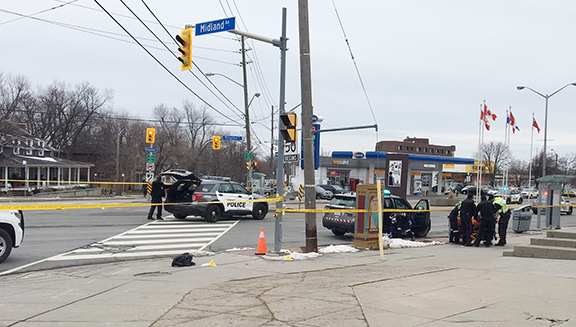 Police and paramedics place a man on as stretcher near the intersection of Kingston Road and Midland Avenue. The province's Special Investigations Unit (SIU) is looking into the incident after police discharged an anti-riot weapon at a man. Photo by Alan Shackleton.

Ontario’s Special Investigations Unit (SIU) is investigating an incident earlier today in which Toronto police discharged an Anti-Riot Weapon Enfield (ARWEN) at man in the intersection of Kingston Road and Midland Avenue.

An ARWEN is a weapon that fires less lethal rounds such as foam, wood, rubber or tear gas.

According to a press release issued by the SIU this afternoon, Toronto police officers responded to a call about a carjacking in the area of 3018 Danforth Ave., just west of Victoria Park Avenue, at approximately 11:28 a.m. on Thursday, Dec. 30.

At approximately 11:50 a.m., the vehicle was reported abandoned at the intersection of Kingston Road and Midland Avenue, the SIU said.

The male suspect did not receive serious injuries, the SIU said. He was transported to hospital and is “being formed under the Mental Health Act.”

The SIU is an independent government agency that investigates the conduct of police officials in incidents that may have resulted in death, serious injury, sexual assault and/or the discharge of a firearm at a person.

Anyone who may have information, including video or photos, about this incident is asked to contact the SIU at 1-800-787-8529 or online at: https://siu.on.ca/en/appeals.php