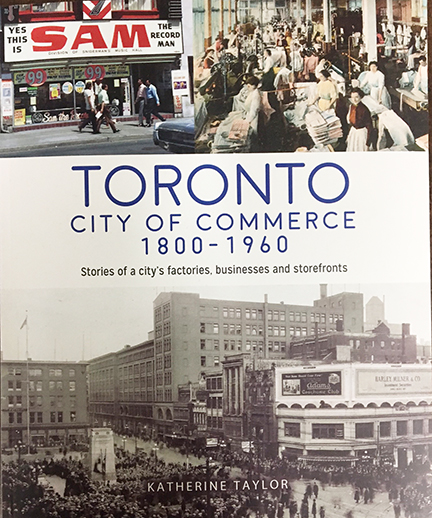 Katherine Taylor (shown in inset photo) has released her book Toronto: City of Commerce 1800 -1960 that looks at the city's commercial and industrial history.

From the west end of Toronto to the Beach, and everything in between, author, banker and Toronto historian Katherine Taylor has seen it all. She’s putting all that knowledge and more into her new book Toronto: City of Commerce 1800 – 1960.

Taylor has long been interested in Toronto’s history and evolving infrastructure.

“I’ve been doing research on and photography of different Toronto spots around the city for maybe about 10 to 15 years now,” said Taylor. “I have my own blog site, One Gal’s Toronto, where I do the heart of my work.”

Taylor’s book covers Toronto’s famous and forgotten businesses from 1800 to 1960. That timeline overlaps with many significant global events including both the First World War and Second World War, but it was something else that really catapulted Toronto’s economic development.

“Certainly the industrial [revolution],” said Taylor. “I think the railroads for us were a big deal. That’s when it really puts on the gas. It really grew…We grew so much.”

Taylor has a background in finance as a banker, and it has given her a unique perspective on Toronto’s growth and what businesses were able to stick around in the city. “I mean obviously the banks,” said Taylor. “Banks just absorb other banks, right? That’s what they do. In that way, they adapt and change. They’re always looking for something viable, something that they can sell.

Taylor has spent the last 10 years as a resident of the Beach and the neighbourhood hasn’t changed as radically as some of the other areas in Toronto documented in her book.

“I’m always interested to see the businesses that were around and the Beaches is quite true to its origins,” said Taylor.

The draw for the area has always been the beaches along Lake Ontario, she said.

“It’s remarkable to me when you walk around in the summer here you see and you feel that people have travelled here to take in the beach,” Taylor said. “To take in the shops and restaurants and that’s very true of the way it was in the last century as well.”

That unique quality of the Beach is something that stands the test of time, but there are some other reasons the neighbourhood is so inviting, said Taylor.

“It (the Beach) does still retain this ‘separate village’, a place apart from Toronto feeling,” said Taylor. “It’s quite interesting. And it’s really walkable. I mean, that’s a big part of it as well. It’s a very walkable neighborhood…It’s a place for Torontonians to go to unwind.”

Though she now lives in the Beach, it was Taylor’s upbringing in the west end of Toronto that ignited her passion for documenting Toronto’s economic history.

“What really spurred me on was that I grew up in the west end, where there was quite a lot of leftover industry,” she said.  “Being in The Junction where all the railways were, there was so much leftover industry and these great hulking buildings with ghost signs that I’d always loved.”

Taylor wanted to record Toronto’s commercial history before it was too late.

“When it occurred to me that I wanted to start writing these things was when I would take the streetcar into work every day,” said Taylor. “It would take me along King Street and traveling that route, year after year, I saw so much change happening in the city, and especially that corridor on King as you go from Bathurst to Spadina. Great old buildings. Wonderful old buildings. I started to really kind of fear for them.”

Balancing the conservation of Toronto’s historical landmarks, nature and wildlife with the need to improve its infrastructure is a constant struggle, but one that Taylor is optimistic about.

“I think we’ve made great strides in raising awareness of the importance of preservation, not just for heritage historical purposes, but also as an environmental means,” said Taylor. “Saving buildings is always so much better for the climate and environment than it is to tear one down and build anew.”

Taylor hopes that her book will generate interest for some forgotten areas in Toronto for future generations.

“I think just the breadth of industries that we had here at one time, I’m glad to record them,” she said. “Some that may have been forgotten that maybe one day future generations will look to and there will be this sort of official record of them to get people interested in these spots again.”

For Taylor one of the most rewarding aspects of writing about Toronto was the people she had the opportunity to interact with.

“From my years of writing about Toronto businesses the most gratifying and really heartening part for me has been how many families descendants of these original shopkeepers and factories that people who built these factories have reached out to me,” she said.

It isn’t just about creating an archive of Toronto’s businesses that motivates Taylor. She is also interested in shining a light on some of Toronto’s forgotten landmarks and the people who live and lived there.

“I’ve connected with so many descendants of these early Torontonians,” she said. “It’s just really gratifying because their histories are kind of lesser-known products, maybe lesser-known areas of the city. They’re finding their own stories being recorded and kind of celebrated.”

Preservation is a worthy goal but sometimes change is for the better, said Taylor.

“It’s what a city is expected to do, is grow. I think the benefits of that are diversity. I am eternally grateful for the variety of restaurants and what a great new culture brings.”

However, Taylor believes that growth shouldn’t come at the expense of an area’s identity.

“If you come to the Beaches and it’s just chain after chain why travel around if we’re just being sold the same bill of goods?” she said. “I would really love to see more of the independent, little local businesses that have been so hard hit [by the pandemic].”

For more information on Toronto: City of Commerce 1800 – 1960 and Katherine Taylor’s blog, please go to https://onegalstoronto.wordpress.com/