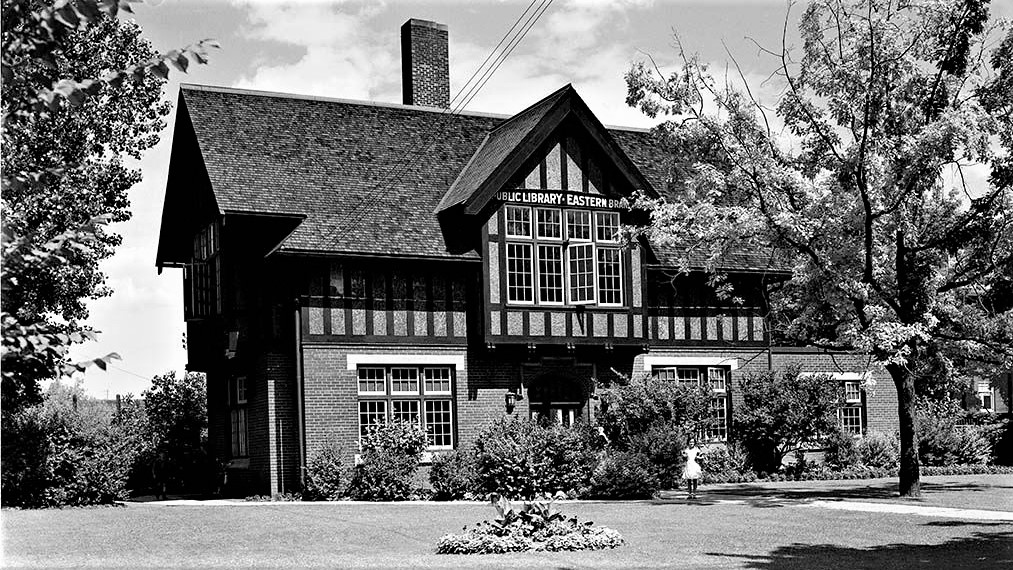 Photo above shows the Main Street Library (then known as the Eastern Branch) in 1939. Inset photo shows the library in 1922, shortly after it opened in 1921.

This year 2021 marks the 100th anniversary of the Main Street Library.

A library, dear readers, is not a building made of bricks and stone – it is an idea that people have to be able to read and understand, and think about life and the world and all its complications.

A library is comprised of people, not bricks and stone.

They are the people who help others know the meaning of books and to understand literature, history and dozens of applied items for the knowledge of the people of the East End.

The idea of a library actually began more than 125 years ago in the same area as where the Main Street Library is now located on Main Street just south of Gerrard Street East in what was once the Town of East Toronto (1888 to 1908).

There were schools in the Main Street area back then but no library. The residents, much like people who live here today, looked for a place similar to our present library because they had a thirst for knowledge that they could only find in books, manuscripts and written essays.

Back then they found it at the YMCA which was located where Ted Reeve Arena now is.

That was the beginning of the search for a library in the area more than 100 years ago.

Now let us jump ahead a few years as the YMCA was dismantled and did not have the space for a proper library. There was no permanent library in the community, but one was needed.

Finally the idea of a library in the Main and Gerrard area came to fruition. It was built for the grateful people living in the area, and is a testament to their dedication, diligence and the quest to preserve the knowledge in books for the young, the old and the disadvantaged.

The first librarian had a great educational task in front of her, and that was the case 125 years ago, 100 years ago and it still is as libraries help people learn about all aspects of life and gain knowledge.

Take a look inside the Main Street Library today and you will see it is made up of different sections for people of differing ages and also by subject matter.

That first librarian was Margaret Wainwright and her task was challenging. The challenge continues today for librarian Sandra Lee who has to deal with maintaining a love of reading books and other material for people of all ages. The original Main Street Library was small and inadequate for the growing population of the area, and in the 1970s a movement was undertaken to improve and expand the facility.

Through the work of the library staff and local architects, that was able to take place. There was a large addition for the reading and story room for youngsters called the children’s library section. Also, an 800-square-foot area in the front was also added. The front lawn of the library was also landscaped and made into a wonderful site for pedestrians.

The greatest addition was for wheelchair accessibility. There were other features also added that made the Main Street Library more modern.

Now, after 100 years, the library is still a people place and that could not have been done without the work of the librarians and staff.

For those who would like to learn more about the history of the Main Street Library, The Beach and East Toronto Historical Society will be presenting a virtual presentation on the evening of Tuesday, Dec. 14.

The presentation by Fiona Smith, of the Toronto Public Library, and Barbara Myrvold, of The Beach and East Toronto Historical Society, will begin at 7 p.m. It will talk about the library’s history and include a virtual tour.

For the link to the presentation, please go to http://www.tbeths.com

On Dec. 15, residents are invited to the Main Street Library branch to share their favourite memories which will be added to a scrapbook, and for other informal events.