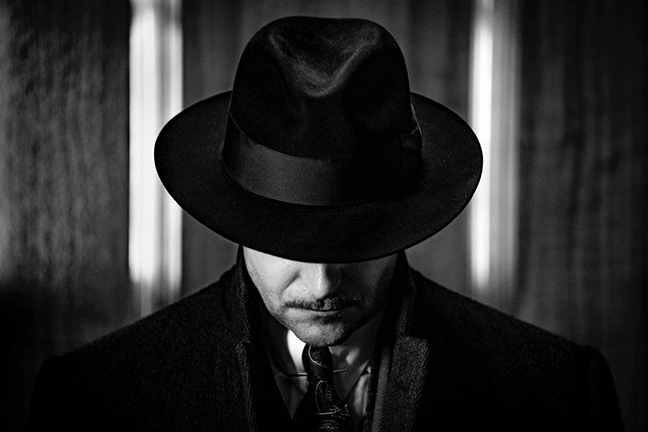 Beach photographer Kerry Hayes took the above photo of Bradley Cooper on the set of Nightmare Alley. Shot mostly in and around Toronto, Nightmare Alley is directed by Oscar winner Guillermo del Toro. The movie opens on Dec. 17. Inset photo, Kerry Hayes' work including this photo from Glen Stewart Ravine is now on display at Skaut Design on Kingston Road. Photos by Kerry Hayes.

The psychological thriller from Oscar-winning director Guillermo del Toro features a stellar cast, but it takes hundreds of talented people working together behind the scenes to bring a movie to life.

Still photographer Kerry Hayes kindly invited me to his Beach home for a talk about his brilliant 40-year career on more than 100 film sets.

BF: How did you get started in the movie business?

KH: My career in the film industry was completely serendipitous. After I got out of college I drove a taxi in New York. That was fun for a couple of years, but eventually I realized it was not going to be fun for the rest of my life. I had recently discovered photography and I loved it, so I started working as an assistant for a number of commercial photographers. Within a few years I was out on my own shooting for Time Life Publications and annual reports and exhibiting my personal work at Soho Galleries which was my ultimate goal.

A friend told me about a gig that needed to be shot with an 8-by-10 view camera, skills I had learned as an assistant. Turned out it was production designer Mel Bourne. He needed large format negatives in order to produce the huge, scenic photo backdrops used on sound stages. For instance, they might shoot a scene that takes place in a penthouse with windows overlooking Central Park so they build a penthouse set on a sound stage, but you have to see Central Park out the windows. So I started shooting these plates for a number of movies. That eventually led to my first gig as an on set photographer on Woody Allan’s Zelig. And the rest is history.

BF: You have worked with great directors on Oscar-winning films such as Prizzi’s Honor, Legends of the Fall, Spotlight, The Shape of Water and now Nightmare Alley. Do you get much direction in your work?

KH: On set movie photographers rarely get direction from the directors. My job is what’s called the “unit photographer”  and I’ve done it since 1980. I’m on the set every day of production. It’s a union position and I’m part of the camera crew. You need to be very unobtrusive. You really don’t want the director to even know you are there. You want to stay out of the actor’s eye lines so you’re not distracting them.

The fact that you don’t get much guidance on the set is really a nice part of the job. Nobody is paying attention to you. It’s a kind of a freedom, a relaxed working condition for a still photographer on set, but it can be tense in other ways. Because I shoot while they are filming, you have to get the pictures that the studio needs without disturbing the actors or anyone else for that matter and not disturb the filmmaking process. You have to be absolutely silent and unobtrusive. It’s a learning process that takes a while to figure out. How do you remain invisible and silent on the movie set and get the shots you need? The skill set is photographic, of course, but also intuitive; knowing what scenes are important, recognizing key moments that you need to capture. The other part is learning how to do it silently without getting in people’s way and most importantly without distracting the actors or the director.

You’re usually working right beside the film camera, you have to stay out of everybody’s way. If it’s too crowded and somebody’s got to go, it’s you. You work right beside the film crew, but you always have to give way if they have to be somewhere you want to be. During rehearsals you work out what your moves are going to be, it’s kind of a dance. It’s a bit easier today because everybody is off looking at a monitor away from the camera so you don’t have so many bodies right around the camera.

BF: Movie posters are sometimes taken from your stills. A poster helps define what the film is about. Your photo “Fedora” is an evocative image of Bradley Cooper in Nightmare Alley. How did you capture that look and mood?

KH:  It’s your eye as a photographer and your intuition and insight about the film, knowing when you must get a particular shot. You’re always looking for images that convey the look and mood of that movie as you put it, what the film is about, that says something about a particular character or the relationships. The more information a particular still image reveals about any or even all of those considerations the more important it is for you to capture it.  Recognizing those moments and being able to get in there and get it is what makes you successful as a unit photographer.

For instance, the picture of Bradley Cooper with the hat in the elevator. I thought it was just a shot of him walking out of an elevator. But then, luckily, I went and looked at the monitor and I saw that it started with that graphic, mysterious shot with the hat. I ran over for the last take and grabbed that shot. You have to be able to recognize those shots and make sure you get them. Part of the art of being a good set photographer is just that, looking for the photo that could be used in a poster or in a promotion or the key set of images that studios will assemble from the literally tens of thousands of photos you take. BF: You are transitioning from the film industry to fine art.

KH: I have always considered myself as first an artist. I had some shows in New York, where I am from, early on in my career and I’ve always kept a hand in it. Recently I have learned how to print and I just love it, I do my own printing for exhibits and galleries. Although I’ve retired from movie set photography I will be publishing a book in 2022 featuring 40 years of my behind the scenes photos from some of the era’s most iconic films. It is titled “Waiting for ‘ACTION!’” with a foreword by Guillermo del Toro.

Readers will soon be seeing Hayes’ work from Nightmare Alley everywhere and prints of his beautiful personal art photography can currently be seen at Skaut Design on Kingston Road. where they are available for purchase. I can hardly wait to see Nightmare Alley!