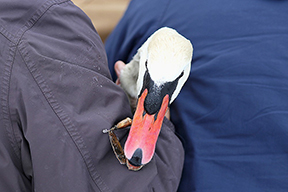 Photo above shows a swan with a fishing lure caught in its mouth. Inset photo shows the tangle of fishing line columnist Ann Brokelman recently got caught up in while trying to take a photo of a turtle. Photos by Ann Brokelman.

This column is quite different and a bit depressing than what I usually write, but I had an experience a little while back that I cannot seem to move past. I am hoping that by writing about it and raising a little awareness, I can make a difference.

This story began when I took a call from the Toronto Wildlife Centre (TWC) to take photos of the post-rehabilitation release of a beautiful snapping turtle. This poor reptile was tangled in a fishing line, including the hook, for three days before the resident who first spotted him was able to catch him.

It is not that the resident was trained to rescue, but that the turtle eventually became so entangled in the line that he simply could not evade capture. Luckily, his rehab went wonderfully. He made a full recovery and was on the verge of a successful release. Thus the call for me to take pictures.

As I was looking for the perfect spot to capture the moment, I took a few steps off the shore, by the water and tripped. I am not the most graceful of people, I know, but I did not think there was anything around me that could have caused a problem.

As I moved around, I almost tripped again, which is when I realized that fishing line had become tangled around my feet and ankles. After witnessing my trouble, the TWC staff came over and helped me pull the line off. We found it had wound itself not just around me but also around plants near the water’s edge, across the ground, and up and into a nearby tree.

Why did this get to me? It was just a little fishing line, but we were literally in the process of releasing a turtle that had nearly died after being tangled in a fishing line.

Please look at the inset photo and see all the line I had been tangled in. Look at the mess of it and try to imagine an animal trying to free itself from that mess.

There was so much of it that I do not think I would have had the strength to break it if I needed to. I honestly think, without the help of the TWC, it would have taken me half an hour to unwind it all.

If the turtle had been caught up in the line again, or a duck, swan, raccoon, I do not think they would ever get free without help.

Now what about you? You are not the kind of person to throw trash out your car window, or leave fishing line in a park, but want to help more? If you see fishing line on the ground, by the water’s edge, or hanging from trees, please pick it up, put it into another bag so it is not loose, and then dispose of it.

If possible, do not throw it directly into garbage cans as other animals like squirrels and raccoons may go in there looking for food and get caught. If you are environmentally conscious, you can look up fishing line recycling stations as not all lines are recyclable in the blue bin.

If you see an animal like a duck, swan, goose, or anything else caught up with fishing line, please call the Toronto Wildlife Centre and leave a detailed message. Take a photo if you can and include information about where you saw the animal.

Finally, share your knowledge. Educate friends, family, and neighbours who fish or spend time near water about the harmful impacts of improperly discarded fishing tackle.

If even a few extra people picked up a few strands of fishing line, who knows how many animals might live another day.