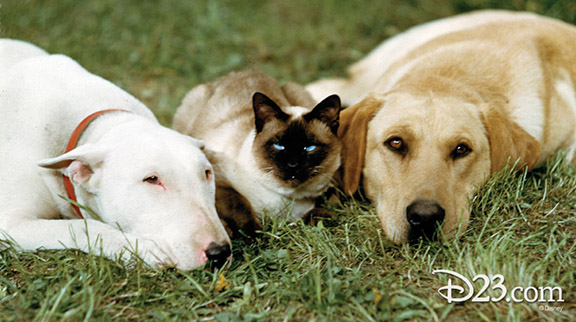 Photo above: A bull terrier, a Siamese cat and a Labrador retriever are pals in which Disney film?

Beachers love our four-legged friends, but critters can be unpredictable. Name these films in which animal actors are put in tricky situations.

1.) In 1961 Sheila Burnford wrote a novel based on her own pets though it wasn’t a true story. Two dogs and a cat travel across the Ontario wilderness trying to find their way home. Walt Disney adapted the book into a beloved 1963 movie partly filmed in the Toronto area using local actors.

2.) Did you know that animals in film can have stunt doubles? Four Irish terriers were used to portray Rexxx, “Hollywood’s top canine star” in Firehouse Dog (2007). One of the most memorable movie scenes filmed in the Beach shows a horse galloping down Kenilworth Avenue. A number of horses doubled for the lead horse in running, fighting and swimming. Some had to be dyed to match the star. That’s a horse of a different colour!

3.) Who let the dogs out? In this classic movie a family has to eat out after the neighbour’s hounds steal their doggone Christmas turkey. Not good boys! I double-dog dare you to guess this film. Watch for the East Toronto locations and streetcars.

4.) An old showbiz adage says never work with children or animals. A baboon named Typhoon was difficult to control on set and the biggest animal star in this science fiction thriller, but the title went to a very small creature. Be afraid, be very afraid and don’t try this experiment at home.

5.) The reindeer are animatronic in this seasonal comedy except for one scene filmed at the Toronto Zoo. Polar bears also got their shot at stardom.

6.) Truth is stranger than fiction. The filmmaker wrote the screenplay after reading a news article about a mobster arrested for smuggling endangered species into New Jersey, including a 10-foot Komodo Dragon. The lizard steals the show in this parody of gangster movies which features the more docile Asian Water Monitors, but you knew that, right?

7.) A grieving widow takes her little Pomeranian dog with her to St. John’s Norway Cemetery at Woodbine Avenue and Kingston Road. Her cute pet is named after Walter Cronkite.

8,) Sixty Canada Geese were trained to fly alongside ultralight aircraft in this 1996 film based on a true story. Watch for the birds soaring over Scarborough.

9.) A Chinese Crested Hairless dog named Harry played Krull in this 2003 romantic comedy. Harry was fitted with a plastic tube that ran along his body under a sweater. The little dog lifts his leg on a verbal cue from his trainer and water is pumped through the tube. Would a pet relieving themselves on your pool table be a deal-breaker in a new relationship?

10.) A neighbourhood cat likes to climb our catalpa tree. The purr-fect cat with the special talent to hiss on cue was needed for this otherworldly fairy tale. Astro the cat will go down in hiss-tory for playing the ill-fated Pandora in the Best Picture Oscar-winner.

Are you feline lucky? Check your score with the answers below.