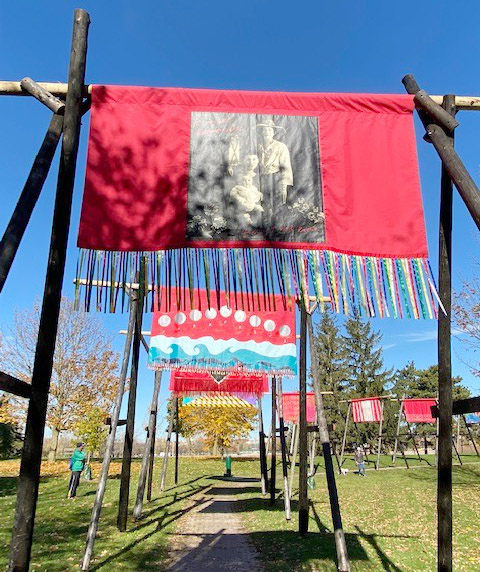 The Red Embers installation is now on display in Ashbridges Bay Park. Photos by Nicholas Dietrich.

The official opening ceremony of the Red Embers installation will take place at Ashbridges Bay Park on Sunday, Nov. 21 at 2 p.m.

Organizers Lisa Rochon of Citylab and executive director of Native Women’s Resource Centre of Toronto Pamela Hart welcome everyone to join them at site of the meditative pathway for the ceremony.

“Red Embers is envisioned and designed by an all-women team of designers and Indigenous artists as a work of civic beautification. It is also a sacred memorial to the Missing and Murdered Indigenous Women and Girls, Trans, Two Spirited,” reads a press release.

Mighty cedar gates are sited between the land and water, framing the pathway while the banners float above. There are 13 gates to symbolize the 13 Grandmother Moon teachings and lunar system.

“The charred cedar posts represent the strength and resilience of Indigenous women, honouring a sisterhood that stands strong even after the attempts to scar and damage have been endless,” said the release.

The banners attached to these posts will float above the pathway, “offering healing through the sound of their jingles and the movement of canvas in the wind.”

At the ceremony, Elder Jacquie Lavalley will provide the blessing, and female trans drummers and jingle dancers will be present to offer healing.

The remounting of Red Embers was made possible by the collaboration of Native Women’s Resource Centre of Toronto and its womxn members with Indigenous artists from across Turtle Island to create this installation in partnership with Rochon.

There has been generous support for the installation in Ashbridges Bay Park, which is part of ArtworxTO, coming from the City of Toronto’s Indigenous Affairs Office, Cultural Partnerships, and Parks, Forestry and Recreation.

“We are grateful for the genius of participating artists, and the dedication of the ANEX public art installation crew,” reads the press release. The press release also gives thanks to the women of the Regent Park Sewing Collective who stitched the banners and helped with finishing details.

Red Embers was originally installed at Allan Gardens in 2019 but were carefully stored away during the COVID-19 pandemic. The first installation was made possible by a team of designers, including Indigenous designers Tiffany Creyke and Larissa Roque, who won a Park People public space competition grant.

“This location in the Beaches was chosen for its serenity and balance between Lake Ontario and the city. The slight crescendo of the path and wave of its direction mimic the emotions the banners will instill,” read the press release.

“By listening and learning, feeling and acknowledging, we can honour those lost and stolen.”

All are welcome and can find the ceremony on the Martin Goodman Trail in Ashbridges Bay Park just past the Beach Community Edible Garden and public washrooms.