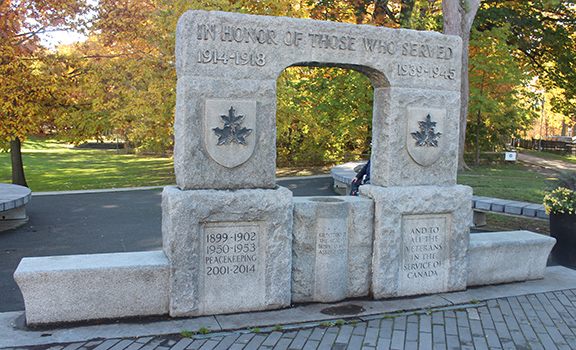 The cenotaph at the entrance to Kew Gardens on Queen Street East was put up by the Beaches Businessmen's Association in 1946.

The War Memorial cenotaph in Kew Gardens in the Beach is one of only two on Queen Street in Toronto. The other is in front of Old City Hall.

For a number of years, the citizens of the Beach would mark Remembrance Day on Nov. 11 in different locations, at schools and in religious buildings.

However, it came to some people that there should be a place in the Beach for residents to honour those have served and given their lives for our country.

At that time, shortly after the end of the First World War, veterans in the Beach purchased an old building that had at one time been a theatre, amongst other things, but was now vacant. The building was located on Lee Avenue just north of Queen Street East.

The building was turned into the Great War Veterans Association Beaches Branch. Later the association became the Royal Canadian Legion, and found the building on Lee Avenue too small.

The Beaches Branch Legion later relocated to Kingston Road just east of Woodbine Avenue where it remained until its sale in 2004.

A year after the Second World War ended, the Beaches Businessmen’s Association came together in 1946 and put up the current War Memorial cenotaph at the entrance to Kew Gardens on Queen Street East. This year marks the cenotaph’s 75th anniversary.

It now stands as a symbol to the memory of all those Canadians who served and gave their lives in the First World War, Second World War, Korean War, Peacekeeping and Afghanistan.

Lest we forget! We will not forget all of those great Canadians.

I will see you there on the morning of Thursday, Nov. 11, for the Remembrance Day ceremony in the Beach.

My father, who grew up in the Beach and lived on Waverley Road (I now live down the street from his old house), was an Army cadet and participated in the opening ceremonies for the cenotaph. So every time I pass I think of the men and women who gave their lives for this country. But I also remember my dad.

Shame about the spelling mistake.