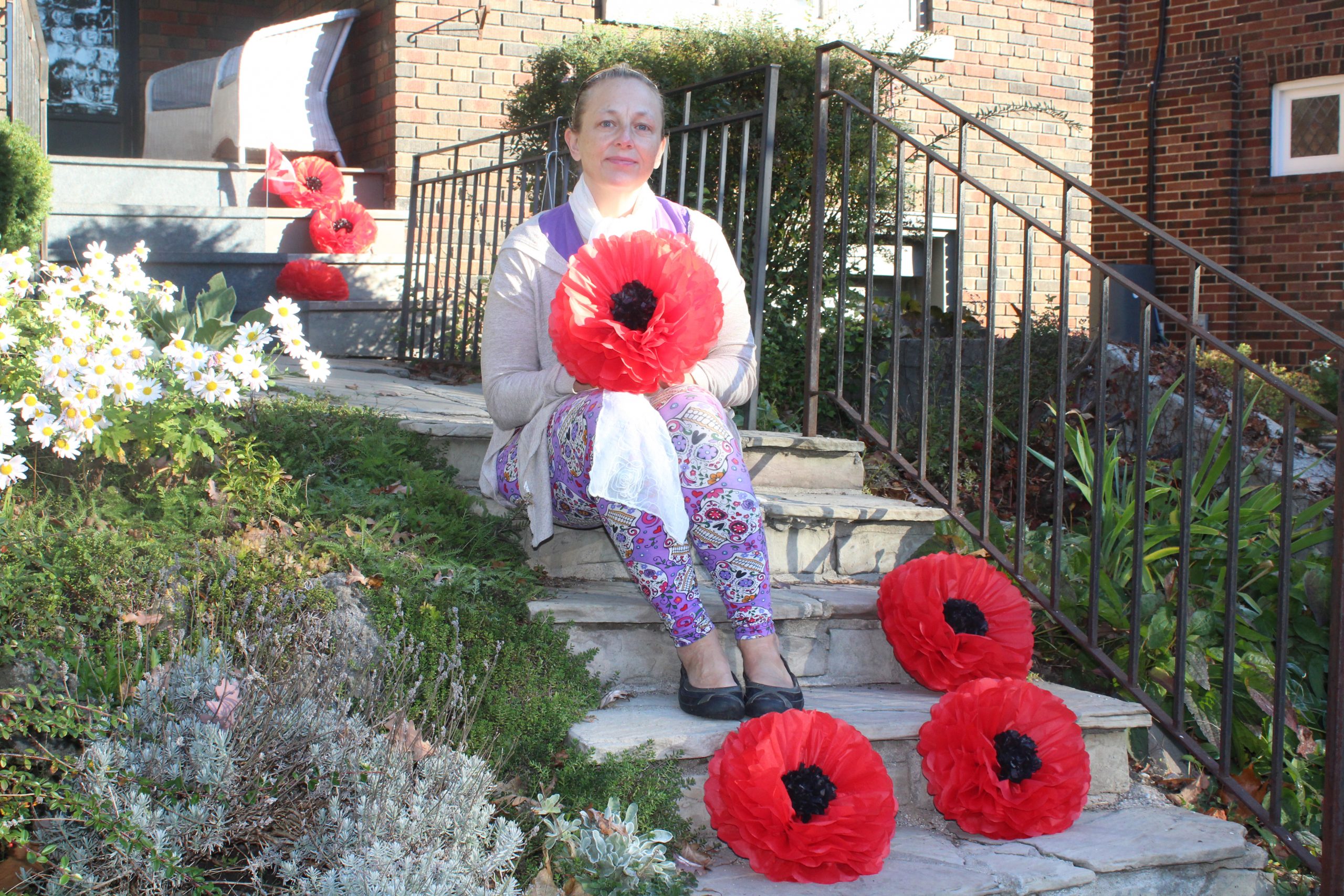 Beach resident Margot Rockett with the large tissue paper poppies she has been making and selling to raise money for the Royal Canadian Legion's Poppy Fund. Photo by Alan Shackleton.

Beach resident Margot Rockett’s plan was to make 100 large tissue paper poppies for people in the community to hang on their doors and help her raise a $1,000 for the Royal Canadian Legion’s Poppy Fund. But then her story was aired earlier this week on CTV National News and she has since been overwhelmed with thousands of requests from across the country.

There is simply no way she can make enough of the tissue paper poppies to meet the demand, she told Beach Metro News in an interview Friday, Nov. 5, morning.

“Everyone wants them. I really, really want to help people out, but I’m overwhelmed. I can’t help them,” she said.

Last year, with virtually no publicity, she raised $800 selling the large poppies locally. This year, Rockett reached out to Beach Metro News to help spread the word of her campaign in the neighbourhood and set a target of making 100 poppies with a $1,000 fundraising goal.

That was going fine, and she had made her cell phone number available so people could text orders to her.

Then story then ran across Canada earlier this week.

Rockett was being contacted by people from Vancouver, Calgary and even the United States who wanted the poppies she was making. “My phone blew up. I’ve been spending all my time trying to answer texts, but even that’s impossible there’s so many.”

She is upset she won’t be able to respond to the many people who have contacted her, and wants local residents to know her priority will remain making the 100 tissue paper poppies already spoken for.

Rockett said many people were sending her texts telling her about their family members who had served in the military. “I’m truly touched by what they are telling me. I’m hearing family stories. I’m sad and heartbroken that I can’t get them poppies.”

She has created a text reply to let people know there are no more large poppies available for this year, and has set up an email at doorpoppies@gmail.com for people who are interested in getting more information on them for next year.

“I’m sad this has happened. People are getting mad at me in follow-up texts because I didn’t respond right away, and accusing me of sucking them into a scam. I just can’t answer all the texts,” said Rockett.

She said she has also been contacted by the Royal Canadian Legion’s national office regarding the large poppies, and will be talking to them more after this Remembrance Day. She said the Legion is extremely careful about allowing the trademarked Poppy image to be used in ways that do not support The Poppy Fund.

The Legion has trademarked the Poppy so it cannot be used in ways that do not raise funds for services it provides for veterans and their families.

“On June 30, 1948, on behalf of the people of Canada, the Legion was given the responsibility to safeguard the Poppy as a sacred symbol of Remembrance, a symbol of the sacrifice of our Veterans. The Legion ensures that the Poppy is not used for commercial or personal gain, and that it be protected from inappropriate use. It is for these reasons that the Legion requires permission for the use of the trademark Poppy, or the Poppy image as it relates to Remembrance,” says the Legion’s website.

For more on how The Poppy Fund supports veterans, please go to https://www.legion.ca/remembrance/the-poppy-campaign/use-of-the-poppy-funds

Rockett said there clearly seems to be an interest across Canada for such large poppies that can be displayed on doors or in windows, and also be distributed in a way that will support the Legion’s Poppy Fund.

Maybe, she surmised, the idea of selling large poppies for doors and windows will also become an annual part of the Legion’s Poppy Fund campaign in coming years.

And given everything she’s been through this week, that’s something Rockett said she would be happy to see the Legion take over.