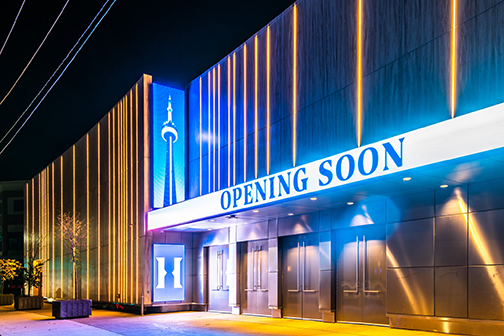 History, the concert and events venue on Queen Street East in the Beach, officially opens its doors on the night of Sunday, Nov. 7, with a concert by Bleachers.

Concerts had been scheduled at History for October but did not take place due to COVID-19 capacity restrictions.

Live Nation Canada announced in a press release earlier this week that History would officially open “after restrictions around general admission capacity were lifted last week.”

History is a collaboration between Live Nation Canada and Canadian music legend Drake, and will have a capacity of 2,500.

It is located at 1663 Queen St. E., between Eastern and Coxwell avenues, and is expected to host some 200 events annually.

“We are thrilled to bring History to life in Toronto with live entertainment that we know will elevate the city’s concert-going experience,” said Riley O’Connor, chair of Live Nation Canada, in the press release.

“We can’t wait for both fans and artists alike to experience our newest destination music  venue.” At an online community meeting held in September of this year, Live Nation Canada officials addressed community concerns regarding History and the impact in would have on residents living nearby. To read the Beach Metro News story on that meeting, please go to https://beachmetro.com/2021/09/16/history-concert-venue-concerns-addressed-by-live-nation-canada-first-show-set-for-this-october/

History’s opening performer are Bleachers, an indie pop band from New York City. Their Nov. 7 show at History is sold out. For more on Bleachers, please go to https://www.bleachersmusic.com/

Future scheduled concerts for November at History include Thundercat on Nov. 11; Deadbeats with Zeds Dead and Guests on Nov. 12 and 13; Jack Harlow Crème de la Crème tour with Babyface Ray and Mavi on Nov. 16; Tevana Taylor: The Last Rose Petal…Final Tour on Nov. 18; and CHVRCHES on Nov. 24.

Performances by East Toronto’s own The Beaches, with special guests The Blue Stones, are slated for Feb. 11 and 12, 2022.

For a full schedule of planned concerts for this year and next History, please go to https://www.ticketmaster.ca/history-tickets-toronto/venue/132501