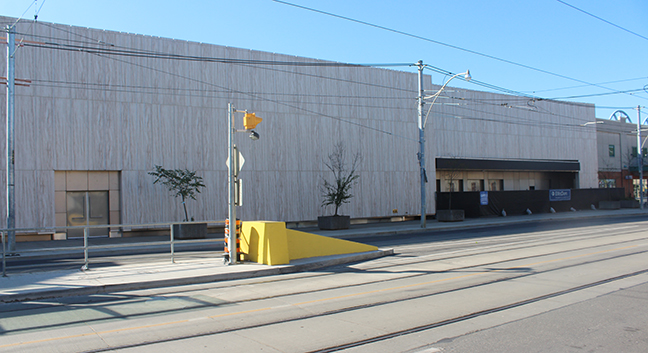 Work continues on the History concert venue at 1163 Queen St. E. Inset photo shows local band The Beaches, set to play at History on Feb. 11 and 12 next year.

More than 100 community members took part in an online community consultation hosted by the History concert venue on Monday, Sept. 13.

The purpose of the virtual town hall was to address concerns that Beach residents have regarding the upcoming opening of the venue which has a capacity for 2,500 people and will be used for concerts and other events.

History will be located at 1663 Queen St. E. between Coxwell and Eastern avenues. It will be operated by Live Nation Canada and was designed in partnership with Drake.

Beaches-East York Councillor Brad Bradford spoke after the moderator’s introduction to let residents know he would be listening to what Live Nation representatives had to say at the consultation and that it was important the community’s concerns be addressed.

“There are concerns and some anxiety being expressed from the community about this, especially from those who live in close proximity to the venue,” he said.

Bradford pointed out the Queen Street East concert venue was approved back in 2018 before he was elected councillor so he was not part of the process when it came to originally working out issues around parking, traffic flow, transit and outside lineups.

Once History opens, Bradford said it might not be smooth sailing from the start and he and the city would be watching to see if any issues did develop that needed to be dealt with.

“It won’t be perfect, especially as we come out of the gate and figure it out…But having a plan proactively in place and making sure we have the escalation measures, the tools and the accountability to get things corrected. We will be working hand-in-hand with you my neighbours and the community to make sure this thing is successful.” he said. “It will be a bit of a get-to-know-you period.”

Prior to Monday’s town hall, numerous concerns from residents in the “Pleasantville” neighbourhood (on the lands of the former Woodbine Racetrack between Queen Street East and Lake Shore Boulevard East east of Woodbine Avenue) were shared with Live Nation Canada.

Given the craziness of this past summer in the Woodbine Beach Park and Woodbine Park area with huge crowds of young people looking to party, the shooting of fireworks, noise, litter, fighting, and all around bad behaviour, many in the Pleasantville community are already feeling extremely nervous when it comes to events involving large groups of people gathered together.

“The Pleasantville Facebook group has been super engaged over what has been a challenging summer. Let’s be very honest about that, you folks have been through a lot. I hear you. We’ve been working on that; stepping together through the summer to try and get things back on course,” said Bradford of the incidents that have taken place.

That explained much of the increased community concerns regarding History.

But Bradford pointed out a concert venue run by one of the world’s largest live music and events companies is a far different scenario than out-of-control raves in public parks and on the beaches.

“We’re not dealing with the waterfront with tens of thousands of people coming from all over the city or outside of the city and a lack of accountability. We are dealing with an operator, and they are on the line tonight” said Bradford.

To that end, Live Nation Canada president of business operations Wayne Zronik explained the company runs more than 100 theatres and outdoor amphitheatres including the Danforth Music Hall, the Budweiser Stage at Ontario Place and the Velvet Underground.

“Our roots run deep in this community and in Canada,” said Zronik of Live Nation which is based in California.

“We’re optimistic and excited about the future of live music. That optimism for the future is demonstrated by significant investments in Canada including the recently announced redevelopment of Budweiser Stage at Ontario Place and the launch of History right here in the Beach.”

Partnering with Drake on the design of History was a perfect fit for Live Nation, said Zronik, as they already work with the Toronto music icon on his live shows.

Drake helped design the venue from the perspective of what would be best for both the fans and the performers.

“He is passionate about Toronto. So when we wanted to build a flagship music hall for the city, it only made sense to work together. Drake was able to help us to curate an incredible experience for the artists and the fans,” said Zronik.

He added that History will host all kinds of music genres and performers, including comedians, and also events such as corporate gatherings and weddings.

History has been extensively designed and tested to be sound and light proof, so noise from concerts should not be an issue, said Live Nation.

The parking concerns are expected to be mostly dealt with by the 300 spots secured by History in the parking lot south of the venue. Combined with the Green P lot, there will approximately 700 parking spots available.

Steve Biasutti will be the general manager of History, and he also spoke at the Sept. 13 town hall. He was formerly the manager of the Danforth Music Hall and is very familiar with the East Toronto area.

He said the amount of nearby parking should be more than enough since the majority of people who attend concerts in the city do not actually drive to them.

“From my experience at the Danforth Music Hall, a very limited amount of people actually drive to concerts,” he said. “The majority of them use Uber, they use taxis or take advantage of the TTC.”

Biasutti said History will encourage those who do drive to the concerts to buy parking spaces in advance at a reduced rate when they purchase their concert tickets.

Regarding security concerns and people gathering in nearby parks or parking lots to continue socializing after a concert, he said History’s security team will making sure people start heading out promptly once shows let out.

“After every show our security team will be monitoring our parking lot to make sure people are leaving in an orderly fashion, and are not loitering to the point of disruption to the neighbourhood. That’s the last thing we want is to turn it into a late-night party outside of the venue after we are closed. Our security is going to take steps to avoid that,” said Biasutti.

“History is not a nightclub,” he stressed. “We are a live music venue focussing on concerts, culture and art, as well as private events. In saying this, a majority of our shows will curfew at 11 p.m. and that includes on the weekends.”

Both Zronik and Biasutti said History is looking forward to being a positive influence in the community, and they will be hiring locally for a numerous positions. For more info on jobs at History, please go to https://livenation.wd1.myworkdayjobs.com/LNExternalSite/2/refreshFacet/318c8bb6f553100021d223d9780d30be Zronik said History also plans to encourage young artists from the community by giving them to opportunity to design posters for upcoming events at the venue.

History is expected to open for shows in late October, and a number of concerts are already on the schedule. Zronik said more than 100 shows are booked for 2022.

Upcoming concerts include performances by Kaytranada, BADBADNOTGOOD, July Talk, Deadbeats with Zeds Dead, The Flaming Lips, and East Toronto’s own The Beaches.

The first scheduled concert History is All Time Low on Oct. 22.

For more on upcoming concerts at History, please go to https://www.ticketmaster.ca/history-tickets-toronto/venue/132501

To see a You Tube of the Sept. 13 virtual town hall, please go to https://www.youtube.com/watch?v=WL0qC8MlsgY