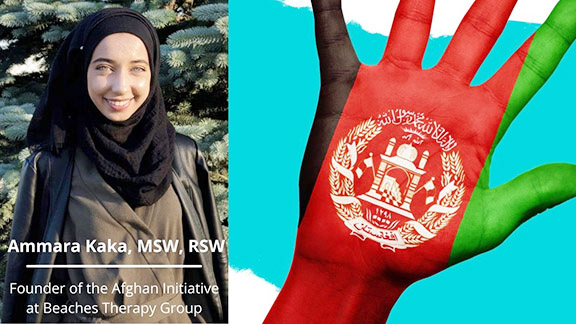 Psychotherapist Ammara Kaka is the founder of the Afghan Initiative at the Beaches Therapy Group.

Beaches Therapy Group has launched a free counselling program which aims to provide the Afghan community with mental health support. The Afghan Initiative, started by psychotherapist Ammara Kaka, creates a space for people affected by the ongoing humanitarian crisis in the now Taliban-led nation.

Lately, conversations about mental health have become a normal part of western society.

“Folks living here are very exposed to mental health support,” said Kaka. “But not everyone is surrounded by that narrative.”

In areas of conflict, for example, many still find it difficult to seek counselling during desperate times. There is a stigma surrounding the topic within the Afghan community, said Kaka, and Beaches Therapy Group hopes to help transform that narrative.

With the situation in Afghanistan and the COVID-19 pandemic, many are fleeing the country or trying to. The Canadian government has permitted an increased number of Afghan refugees to enter the country since its pledge to help up to 20,000 vulnerable Afghans.

“Another thing is the impact of survivor’s guilt,” said Kaka. “People may be thinking, “I’m in a safe area, how do I have the right to go talk to a therapist.””

Kaka, who has been doing social work in some form since 2017, insists that people cannot play the “who’s more in pain” game.

According to her, this way of thinking only further invalidates the natural feelings people have towards the crisis. Many are safe in Toronto but have sleepless nights filled with thoughts about family members and friends still trapped in Afghanistan.

“We shouldn’t have survivors’ guilt but it’s very understandable and also easier said than done,” she said.

The Afghan Initiative therapy sessions began this month and will continue through November.

“I’m always going to be willing to dedicate a few hours of my week to offering those sessions,” said Kaka.

Kaka isn’t tackling this mission alone. Providing support for this initiative are Laura Devlin and Rebecca Loucks, founders of the Beaches Therapy Group which is located in the Kingston Road and Victoria Park Avenue area.

“We were unsure how to offer support in a meaningful way,” said Loucks.

“When Ammara suggested the initiative of single session counselling to support the Afghani community we were immediately on board.”

Although the 50-minute therapy sessions are only offered in English so far, it is an important step in helping the community.

“It felt like an opportunity to mobilize in a way that could make a positive impact,” said Loucks.

Women, in particular, have been targeted by the new Taliban regulations. Their livelihoods have been jeopardized with many unable to attend school under their new leadership. Beach Therapy Group’s free sessions provide women with a place to feel comfortable speaking about their problems and experiences with other women—whether as a survivor or simply as a person affected by the news of hardships others have had to endure. The sessions are not only for women, however.

Nobody is immune to the emotions that arise as a result of this crisis so Beach Therapy Group welcomes all genders.

“I like to say I’ll help anyone from 8-80 cause mental health goes across the lifespan,” said Kaka.

Anyone interested in receiving a free session to safely speak about their experiences or the experiences of people they know can now register at https://beachestherapy.ca/