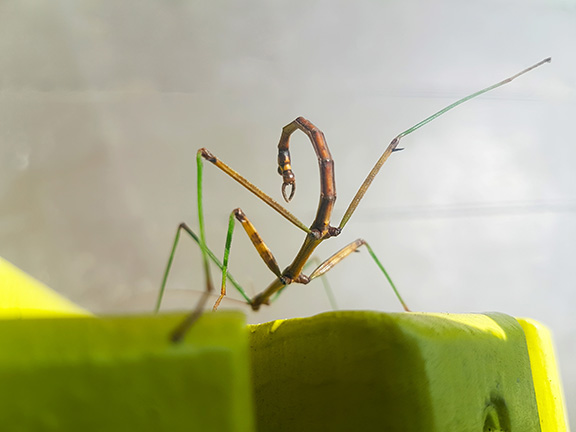 If you’re used to reading my articles, you may have noticed that I don’t write about our six and eight legged neighbours very often. In fact, I owe them a great deal of credit.
Learning to zoom in, use different lenses, play with and balance light settings, all while keeping a picture focused, while taking pictures of various insects and arachnids, has immensely helped me become a better photographer.

And every so often, I end up with an interesting story. I hope this week’s topic doesn’t… bug you too much.

I was at a local park with my friends when Betty, who tags and tracks monarch butterflies, said there was a walking stick in a nearby pie weed bush. My new friend, Faiza, said she had never seen one, so of course we had to find it.

It was ‘part of the fun’ to find a particular stick in a pile of sticks. It didn’t take long before Faiza declared that she had found it. We must have stood there watching it and taking pictures for 20 minutes, without it ever moving. We never touched it or picked it up as part of loving nature is having to respect it from a distance, of course.

If you’re not sure what these little creatures look like, try typing “walking sticks” into Google. Then, after being confused like I was, type in “walking sticks insect” so you can skip all the different pictures of walking canes out there.

The amazing thing is that we’ve all probably seen dozens of them before, but we just didn’t know it was there because of their amazing camouflage.

So, what exactly are walking sticks? They are an insect under the order of Phasmatodea, which includes all stick insects/stick bugs/walking sticks. They are also called ghost insects, from the Greek word ‘phasma’ in their name, because of their amazing ability to disappear, through their camouflage, right in front of your eyes.

They are herbivores, with tree leaves being their primary source of food. If you find one in your garden, don’t panic as they shouldn’t bother your vegetables. If you haven’t realized this by now, walking sticks escape predation by blending into the plant they are standing on.

I can’t stress enough how much they look like a real stick, and they will even sway back and forth in the wind like the other sticks around them. They can be anywhere from 1 to 12 inches (2.5 to 30 centimetres) in length, though the ones I’ve seen have only been a few inches long. The female walking stick is also larger than a male.

Do you need a few more reasons to appreciate these amazing creatures?

Well, they can regenerate entire limbs. That’s right: if its disguise fails, and a bird grabbed it by the leg, a walking stick can shed a limb on purpose, and it can grow an entire new one after just a few molts.

Not impressive enough? How about the fact that some walking sticks can reproduce without males? If a male is available, then the female will lay her normal set of eggs. Without a male, the female will still produce hundreds of eggs, but the offspring will only be female. In theory, these walking sticks may eventually exist as an entirely female species.

When the female is laying her eggs, she will hide them on leaves or bark, while also allowing some to drop randomly on the forest floor. By spreading them out she lessens the chance that all her brood will be taken by a single predator.

One more fact, for good measure? Walking sticks have learned to play dead! If sufficiently threatened, a walking stick will simply let go of the branch they are holding on to, regardless of how high up they are, and fall, unmoving, to the ground below. If the predator had a hard enough experience finding them the first time, I guess the hope is that it won’t get lucky twice.

So now when you are out looking closely at your trees, bushes, on your trellis, garden plants, and especially pie weed, you need to start looking for a walking stick insect of your own. And don’t worry if you don’t find one right away, it may take a few attempts!

Very interesting story Ann on the walking stick.I have learnt alot by your story.
A great story.
Thank you for sharing.

Really great article! Such interesting insects. Thank you for sharing.

Thank you Kimberley. It was really amazing watching them moving