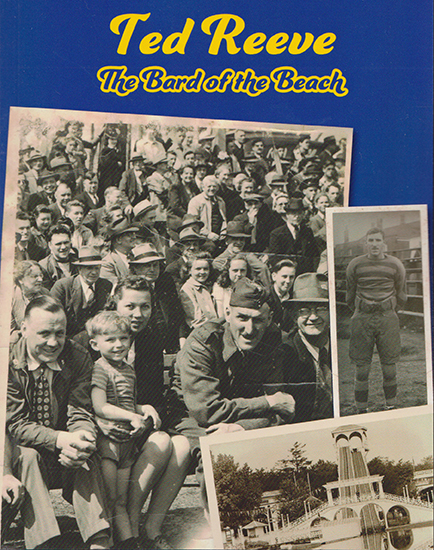 Ted Reeve: The Bard of the Beach is written by Frank Cosentino (inset photo).

“It’s a good feeling in many ways. A few generations have grown up without knowing much about Ted Reeve,” said Cosentino of his decision to write a book about the legendary Toronto athlete and journalist.

“I’m hopeful that the public will realize better who he (Ted Reeve) was and why,” Cosentino told Beach Metro News in a recent interview.

“For example, there is an arena named after him. The role he played with the Balmy Beach Club and teams; his legendary coaching at Malvern Collegiate, at Queen’s University. His columns which were likely to provide humour along with impressions,” said Cosentino.

“His holding court at his home, in ‘Squawg Hollow’ — relying on his wife, ‘the iron fireman,’ to move into action as a hostess for the unannounced occasion. Each area of his life could be a book. As a football player, coach and reporter he wrote and played with much passion on and off the field.”

Reeve was born in 1902 and grew up a Beacher. He lived in the community his entire life until his death in August of 1983 at the age of 81.

He was introduced to the written word early as his mother had a book shop on Queen Street East. Reeve loved to read Dickens as well as Shakespeare and world events.

In 1923, Reeve started writing for the Toronto Telegram newspaper where he remained until the paper closed in 1971.

A few days after the “Tely” closed and morphed into the Toronto Sun, Reeve was given a standing ovation as he arrived for his first day of work at the new paper. It was believed that he gave the Sun a degree of legitimacy.

As a reporter, Reeve focused on sports. But he did it his own way.

He would ignore prepackaged stories provided by coaches or in press releases. Instead, Reeve would write his understanding of the game. This could involve his wit, such as the line from a Toronto Sun story, “The crowd went home in a Volkswagen,’” referring to game few attended.

As a player, he won two Grey Cups in football with the Balmy Beach Club (in 1927 and 1930). In lacrosse he won the Mann Cup twice as a player —  in 1929 (with Oshawa) and 1930 (with Brampton). As a football coach for Queen’s University, he won the Yates Cup (Ontario championship trophy) three times.

One story told about Reeve was how he helped the Balmy Beach Club win the Grey Cup at Varsity Stadium in 1930 over Regina.

According to the Toronto Sun, it was late in the game, Reeve with an injured arm was sitting out. Regina was about to kick a field goal to take the win. Reeve, said to the coach, “’I don’t care what you say, I’m going in.” Regina kicked but Reeve broke through the line and blocked it with his injured arm.

Based on that heroic effort, Reeve wrote one of his most memorable passages:

“When I was young and in my prime

I used to block kicks all the time

But now that I am old and grey

I only block them once a day.”

Reeve’s injuries were themselves the stuff of legend. It has been said that he had 47 broken bones and even fractured his skull twice. Reeve pushed for a hockey and lacrosse arena in the community and lent his name to the fundraising cause that resulted in the opening of the Ted Reeve Community Arena at Main Street and Gerrard Street East in 1954.

As the story goes, though, Reeve purposely missed the opening of the arena to attend to work elsewhere as he disliked any excessive praise for his accomplishments.

Of course, Ted Reeve Minor Hockey association is also named after him.

Reeve also had quite a life outside of sport. He actually fought to be able to fight in the Second World War.

Due to his extensive sports injuries, he was barred from enlisting in the military. Nonetheless he underwent surgery for a vein issue then joined the 30th Sportsmen’s Battery to be a gunner. He began his fighting not long after D-Day. Near the end of the war, Reeve damaged his elbow and was discharged from further service.

When it came to writing the book about Reeve, Cosentino said there was a wealth of information available and he had to decide which direction to go with it all. “There was just so much information and directions which could be taken in writing the book. His attachment to the Balmy Beach Club was a major factor,” said Cosentino. “His legend was there for all to see.”

Cosentino himself is a writer, former athlete and football coach. A Canadian quarterback in the CFL with Hamilton, Edmonton and Toronto in the 1960s, Cosentino also coached university football at Western and York. He is a member of the CFL Hall of Fame and winner of two Grey Cups as a player.

While coaching, Cosentino’s Western teams won the Vanier Cup (the Canadian championship) in 1971 and 1974. Cosentino earned a Masters and PhD in sport history, with special emphasis on Canadian sport, from the University of Alberta.

“It caused me to realize that there was a rich heritage of Canadians in sport. But outside of the news when an event took place, it dropped out of sight. It became part of what I named our ‘cultural amnesia,” he said.

Cosentino retired as Professor Emeritus from York University in 1997 and is the author of 18 books.

Cosentino hopes Ted Reeve: The Bard of the Beach will help share some of Canada’s impressive sports history with younger readers and bring the legendary exploits of Reeve to future generations.

The book is available for purchase in a number of ways including visiting http://www.valleyoldtimers.com or by sending an email to valleyoldtimers@gmail.com