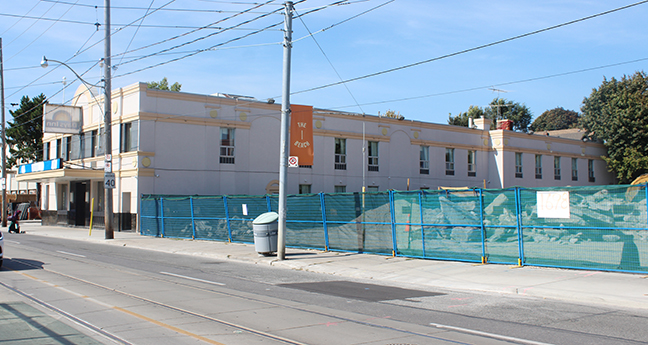 The YWCA has operated a temporary emergency homeless shelter for women in what used to be the Days Inn hotel on Queen Street East since May of 2020. With renovation work on their permanent shelter facility near Davenport and Dupont near completion, the shelter plans to move out by the end of this year at the latest. The site is slated to be home to a six-storey condo project in the future.

The YWCA’s temporary emergency shelter for homeless women on Queen Street East in the Beach will continue to operate for those in need even though construction work has started on the condo project which will eventually lead to the demolition in the building.

The shelter is located in the former Days Inn Hotel at 1684 Queen St. E. The YWCA moved into the building courtesy of a short-term City of Toronto lease in spring of 2020.

The need to set up in the former hotel was as a result of extensive renovation work being done to the YWCA’s existing emergency shelter on Davenport Avenue and Dupont Street area.

That work is now nearing completion, and the move back to the site could come as early as the middle of next month.

“We are safely housed until we move,” said Nina Gorka, Director of Shelters and Clinical Services, YWCA Toronto.

She explained they are not under any pressure at all to move their residents as a result of the start of the condo site construction.

Rather, it is the construction work taking place at the Davenport and Dupont site that will determine when the shelter moves from the Beach.

Though there is digging and site clearance going on around the Days Inn site, it has had very little impact on the shelter’s staff or residents, she said.

“To be honest, for a condo development it has not had any real impact on our day-to-day operations,” said Gorka.

Beaches-East York Councillor Brad Bradford said the city’s lease on the former hotel runs until March of 2022 and there are options to extend it if need be.

“The main goal here is to make sure the people receiving services at this location are not negatively impacted,” he said. “The YWCA is close to finalizing their permanent Davenport location and they’ll move back there as soon as their operations permit.”

Gorka said it was highly unlikely that the shelter in the Beach would still be running by the new year. “I don’t think even a Davenport delay would push us to the point where we are staying in the new year,” she said.

Gorka said the temporary emergency shelter on Queen Street East has been welcomed and supported by the vast majority of Beach residents.

“It’s been really smooth sailing, and the neighbourhood has been so welcoming. People have been offering to help and supporting us throughout,” she said.  “It’s been a great temporary home.”

While looking forward to moving into their renovated Davenport space, Gorka said staff and residents will miss being in the Beach area.

“We will have to say farewell to the Beaches and our Woodbine Park. That was a blessing and gift for us through COVID,” she said.

Due restrictions on indoor gathering and other health measures during the pandemic, the shelter ran a number of programs outside in nearby Woodbine Park. “We could not have been in a more beautiful spot. We feel very fortunate, both the staff and residents,” for the space in the Beach, said Gorka.

Bradford said that in the time the shelter has been in the former Days Inn site, there have been few community complaints about it.

“Overall, there has been very little feedback to my office about this location. I’ve only had a handful of concerns come in,” he said.

And of those concerns, many were about making sure those who needed the shelter’s services were getting the appropriate help, said Bradford.

“It’s upsetting to see people experiencing mental health episodes or showing the signs of other struggles they might be having,” he said of some of the concerns presented to him by area residents. “I’m not aware of any safety impacts or anti-social behaviours directly affecting community members.”

Bradford said credit for the smooth integration of the shelter into the community must go to the YWCA. “It was clear that everyone from the very top of the organization to the exceptional teams on the ground are dedicated, professional and passionate public servants.”

He said he hopes those who associated with the shelter in the Beach, as staff or residents, will always have good thoughts of the community.

“I hope the women who’ve been supported here have also been able to experience the kindness and compassion that runs deep in the community. And that they’ve been able to enjoy some of the many incredible aspects of being in this beautiful pocket of the east end,” said Bradford.

“As things begin to wind down at this location, I’m wishing the YWCA team and everyone they support a safe and successful return to Davenport.”

The hotel site will and surrounding lands to the east and west will be part of a six-storey mixed use building providing an estimated 110 residential units. The plan incorporates the preservation of the building that is now home to Murphy’s Law pub on the corner of Queen Street East and Kingston Road.

Bradford said demolition of the hotel will likely take place next spring.