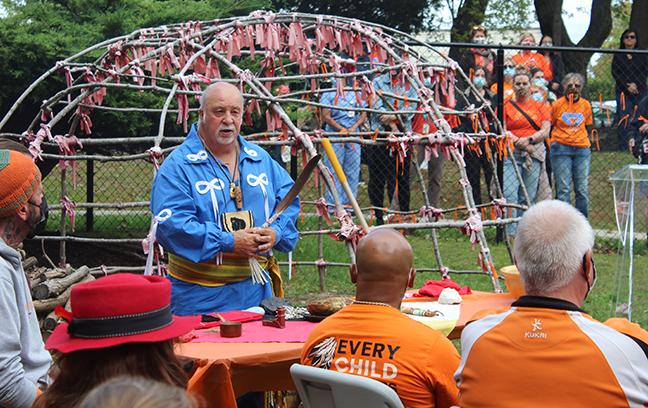 Elder Little Brown Bear, Manager of Aboriginal Culture at Michael Garron Hospital, speaks during a pipe ceremony and sacred fire on the grounds of the East York hospital on National Day for Truth and Reconciliation on Thursday, Sept. 30. Inset photo shows Ontario Lieutenant Governor Elizabeth Dowdeswell, right, and Sarah Downey, President and CEO of Michael Garron Hospital, tie orange ribbons to the Bear's Den All Nations Traditional Medicine Sweat Lodge on the hospital grounds at the conclusion of the ceremony. Photos by Alan Shackleton.

A sombre ceremony was held on the grounds of Michael Garron Hospital in East York today to mark Canada’s first National Day for Truth and Reconciliation.

Held at the site of the Bear’s Den All Nations Traditional Medicine Sweat Lodge at the Coxwell Avenue hospital, the ceremony was attended by a large crowd including Ontario Lieutenant Governor Elizabeth Dowdeswell.

“This is not a day of celebration. It is a day of reflection and looking back,” said Elder Little Brown Bear, Manager of Aboriginal Culture at Michael Garron Hospital as he conducted a pipe ceremony by the sacred fire which was going to burn all day on Sept. 30.

The National Day for Truth and Reconciliation was declared by the federal government earlier this year with the intent of remembering the legacy of the Residential School system, murdered and missing Indigenous women and girls, and for Canadians to become more aware of all of our responsibilities towards truth and reconciliation with Indigenous Peoples.

Little Brown Bear said that change can be made, but it will take all people working together to do so.

“We may sometimes think the culture is too big to change, but we are the culture and we can change,” he said.

“There have been lots of pretty words, but now is the time to commit to those pretty words. Anger is not going to fix this. We must walk with soft moccasins and listen to each other,” Little Brown Bear said. “I grieve so much for those children and missing women.”

He said that declaring a National Day for Truth and Reconciliation is a step in both the healing process and in making permanent change.

“Today is the right thing to do,” he said.

Little Brown Bear that listening to each other and learning the truth about the abuses of the Residential School system and the continuing tragedy of missing and murdered Indigenous women and girls is critical.

“We need to open our ears, clear our minds and eyes and do this in a good way,” he said.

Lt. Gov. Dowdeswell said the sweat lodge site is a “place of hope and healing.”

She said the National Day for Truth and Reconciliation is a day for “both Indigenous and non-Indigenous people to reflect on the past. To listen and to learn, and develop an understanding that will allow us to move forward to together.” Dowdeswell said that in her travels across Ontario she has heard from many people about the lasting impacts of the Residential Schools and the missing and murdered Indigenous women and girls.

“I have heard these dreadful stories. How could we let those things happen and how can we let them to continue to happen in particular with missing and murdered Indigenous women and girls?”

Working together will be the key to a better future, said Dowdeswell.

“This is a day of looking back with sadness as so many are still grieving,” she said. “This day will be worthwhile because it will help us to come to a conclusion on how to work together for a better world.”

“We need to pause and reflect on this important day for us,” she said. “We are so grateful to have Elder Little Brown Bear lead us in this today.”

Those attending the ceremony were also encouraged to sign an orange board with the Michael Garron Hospital pledge towards treating all community members with respect, and tie orange ribbons on the sweat lodge.